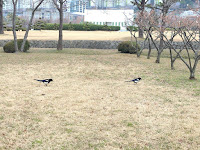 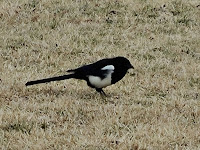 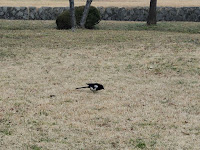 Most people or animals don't want to go outside in the rain, but this day, two magpies run around the grassy school playground with something in its mouth and fly away because they feel good

Shall we watch it together?

Korean Magpies are familiar birds that have appeared in Korean folk songs and folklore since ancient times.

The Korean magpies are considered birds of good luck in Korea.

The crying magpie in the morning was regarded as an auspicious newsletter, and there was no harassment or careless catching of the magpie in the village. Magpies are distributed over a very wide area, including Europe and Asia, North Africa, and western North America. It lives all over the northern hemisphere, excluding the tropical and subtropical zones, and is distributed in regions such as China, the Russian Federation, and Japan's Kyushu near Korea.

In Korea, the magpie was selected as a country bird with overwhelming votes in the public application for the 'National Bird' which was sponsored by the Korean Headquarters of the International Bird Protection Conference (ICBP) and related academic circles.

In Korea, Korean magpies, which were gradually decreasing, were protected by the Forest Service Assistant Protection Committee on February 24, 1966, by excluding magpies from hunting birds.

The national bird is meaningful in that it inspires the image of love and symbolizes the nation. The magpie is one of the friendly birds that have not deviated greatly from our surroundings. You can't find magpies in uninhabited remote or deep mountains.

Magpies nest in trees planted by humans, eat grains and fruits made by humans and even imitate humans. It is also a highly intelligent bird that is close to humans and is good at learning and imitating. However, in Europe, unlike Korea, magpies are regarded as miscellaneous birds along with crows.

I hope that the DPCW's International Peace Law to End War is brought to the United Nations so that world peace will bear fruit and the good news of world peace, including Myanmar, will be delivered.

Then, let's take a look at the religious leaders' efforts to make a substantial peace move in which international peace law on end-of-war is introduced to the United Nations and violence and war are completely eliminated from this global community.

Religious Leaders’ Efforts for the implementation of DPCW, and current and future of online religious peace activities

Greeting to all family members of HWPL around the world. I am Syed Abdullah Tariq, the Founder and President of an NGO ‘WORK’ (World Organisation of Religions & Knowledge) in India which is active in promoting Interfaith Dialogue besides working for Communal Amity and Understanding between different Religious Communities. On this historical day of the 5th Annual Commemoration of the Declaration of Peace and Cessation of War (DPCW), I would like to congratulate HWPL and Chairman Man Hee Lee.

My dream is the Recreation of a New World for All Human Beings with no boundaries or restrictions for anyone where all the present nations will be its administrative provinces. When I found out about DPCW (Declaration of Peace and Cessation of War) with its 10 Articles and 38 clauses for World Peace and HWPL’s resolve to make it legally binding for all countries through the United Nations, I was sure that it was the first step towards the fulfillment of my dream.

At first, it seemed almost impossible for all nations to agree to be bound by DPCW but the phenomenal growth of HWPL within a few years was also an astonishing feat in itself. In keeping with the heavenly and universally acknowledged principles of humanity, I myself and my organization resolve to extend our endless support to the DPCW. I also request all sensible, sincere, honest, and unselfish religious leaders to strengthen the process of World Peace by joining HWPL in their respective countries.

Click on the title for more about "Religious Leaders’ Efforts for the implementation of DPCW, and ...... "