DPCW Article 3 :
Friendly Relations and
the Prohibition of Acts of Aggression

Article 3 - Friendly relations and  the prohibition of acts of aggression

1. In accordance with United Nations General Assembly Resolution 2625 (XXV), States should develop friendly relations based upon respect for the principle of equal rights and self-determination of peoples, and should take appropriate measures to strengthen universal peace.

2. States have the duty to refrain from any forcible action that deprives peoples of their rights to self-determination.

3. States should condemn the illegal occupation of territory resulting from the threat or use of force in a manner contrary to international law.

5. States should condemn, and should criminalize in their domestic law, the planning, preparation, initiation or execution, by a person in a position effectively to exercise control over, or to direct, the political or military action of a State, of an act of aggression which, by its character gravity and scale, constitutes a manifest violation of international law, thus amounting to a crime of aggression.

6. States should refrain from allowing their territories to be paced at the disposal of other actors, whether States of otherwise, to engage in armed force against a third States.

7. States should bear in mind the principle of sovereign equality of states, and should seek to consult all other states, on the basis of reciprocal respect, on issues that may relate to them, in order to resolve and pre-empt disputes which may arise. This provision should apply without prejudice to human rights law and human dignity. 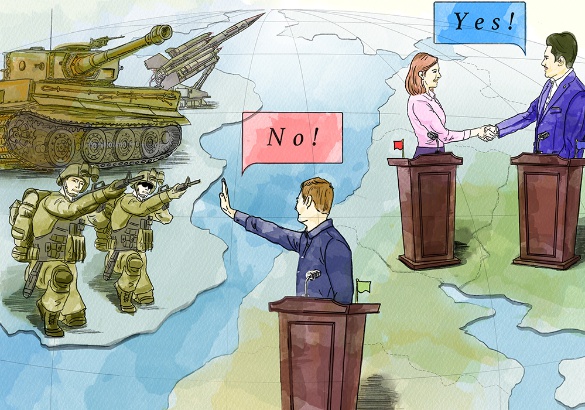