Let me introduce the show 3rd WARP Summit to set the world on fire.

HWPL Chairman, Man Hee Lee who is 6.25 war veteran built such organization in order to hand down heritage with no war and spreading out.

In comparison with other peace act organization, the reason why HWPL is receiving such a great attention from international society is that HWPL has been achieving outstanding outcomes which is unthinkable and inconceivable with practical activities and executive power in order to end all kinds of conflicts and civil war all over the world.

Chairman Man Hee Lee of HWPL has suggested the answer to peace which is world alliance of religions.

HWPL has hosted 'World Alliance of Religions Peace Summit' which 200 thousand of people participated including 2,000 political leaders from 170 countries in order to hand down heritage with no war on 2014 Sept. 17-19.

A former president of Croatia, Stjepan Mesić who participated in ceremony at that time said that "there were no such an incident like this in history which numerous political and religious leaders have come all together to discuss peace. And people said that "there had been no such ceremony in size and content wise and chairman Man Hee Lee's answer to peace is very practical and groundbreaking".

To Women~
Hand down peaceful world to your descendant as mother's love and protect your children from war.

To Youth~
Urge leaders and politicians to legislate international law for peace and cessation of war.

To Journalist (Media)~
Broadcast news for peace to people in the world to inform the importance of peace and peace movement.
[Ex) The leading role of 40 years of cessation of bloody civil war in Mindanao, 'Declaration of international law(DPCW) enactment' which power of execution was re-verified,......] 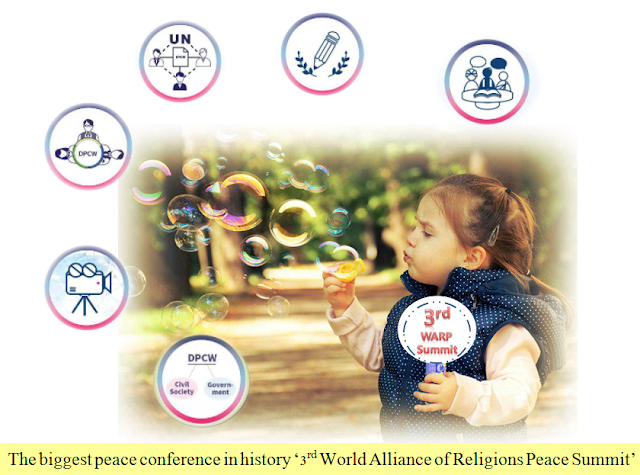