If a dandelion produced a flower,
What are the sky and the earth?

If we say that the sky
produced the flower,
what is the dandelion?

No, no~ idea within narrow limits
Don't worry about that, Be happy about peace~♪
Putting aside such 'A dandelion produced flower' narrow question~ 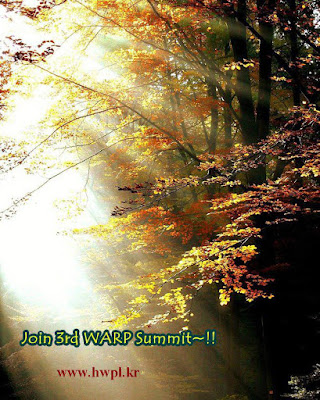 🚌 A Peace Quote
"Where people of goodwill get together and transcend their differences for the common good, peaceful and just solutions can be found, even for those problems that seem most intractable."

3rd WARP Summit has been carved with the world of peace by people who loves peace gathering the mind of peace, folding personal opinions, and actively discussing about peace.

🚏🚏 The Answer of Denuclearization of north Korea!

Funding pressures by blocking 1/3 of export of north Korea by Security Council sanctions against North  Korea which 15 members of the council attended would be the only answer to denuclearization of north Korea?

The DPCW has been carved with the world of peace by people who loves peace gathering the mind of peace, folding personal opinions, and actively discussing about peace.

Peace committee of HWPL who agreed on have proceeded conference several times in Korea and London. Within 6 months, powerful execution was shown once more by proclaiming 'cessation of war world peace legislation of international law declaration'

Now, On 18th of Sep., in 3rd annual WARP Peace Summit, let's take a look at DPCW which is international law for peace to achieve cessation of war. Click~ ⇨ bit.ly/2xybmoi

Why are there two groups which loves him and hates him?

People who loves him give full support because he is doing the work which what I can't do but I wish to do.

People who hates him fully disapprove his work because they hate to sacrifice, they hate to participate in the passionate of peace work and they loves their own benefit and power itself.

The key of peace will be given on 18th of Sep. by a private organization, HWPL which is the conflict solver in the world and the messenger of world peace, Man Hee Lee.

I recommend this address who dislikes messenger of peace.
If you are going be more sarcastic, do not enter.
Throw out prejudice and if you really like to see what is going on in the world for peace, if you ready for peace, click on the link bit.ly/2xybmoi

Peace was the vague dream before. However, you will be surprised that peace is coming in front of your nose.

The completion of world peace is knocking on the door.