An Ardent Peace Activist, Mr. Man Hee Lee is short and energetic.
He is 85 years old in Korean age.

Surprisingly, he did this world peace activity in spite of his old age with vigor.

Mr. Man Hee Lee, HWPL Chairman who fulfills world peace and restoration of light through the culture of heaven, was a Korean War veteran, who fought in the frontlines. Having been deeply deplored over the tragedy of the fratricidal war and the death of the citizens of his own, Chairman Man Hee Lee of HWPL refuses to take any money that the Korean government provides monthly for former war veterans. He is a peace activist who loves his won nation and citizens, and works vigorously in effort to bring peaceful unification to the Korean peninsula.

While watching the tragedy of the fratricidal war, HWPL Chairman, Man Hee Lee made up his mind before his dying comrades that he would accomplish world peace and restore the lost light for his won country and citizens.

I am sure that Unification of North Korea and South Korea could take place because of him. The entire world knows, Mindanao is a place of religious conflict (between the Catholic and Islam), a place where 120,000 people have been sacrificed during a 40-year conflict, and no politician could solve the conflict. This region was a battlefield fraught with tension as the government forces (Catholic) and the rebel forces (Islam) aimed their weapons towards each other. Due to this no one could walk around, even for a second, without fear. 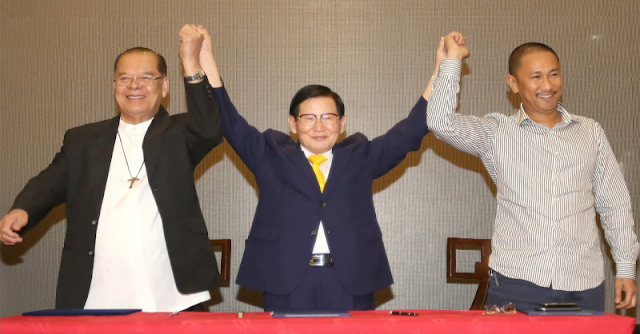 So they pledged before God and all the people of the world to put an end to all the conflicts and to never cause them again, and so they also signed the peace agreement. All the people in the audience who witnessed this were filled with great joy. They embraced each other in joy and danced. The 40-year conflict in Mindanao was restored through peace. The MILF, Moro Islamic Liberation Front and the government forces also signed for peace in front of their president. On January 25th, the next day, many universities gathered at Mindanao state university and held a peace festival.

Let me introduce His Peace Quotes of Mr. Man Hee Lee of HWPL Chairman ^.^
Please give him a big hand~ 👏

Let us become messengers of peace and achieve a peaceful world to pass down as an eternal legacy of peace to the future.I ask Presidents of all States to sign your support for the Declaration of Peace and Cessation of War.I urge all people here to put forth our efforts for the work of peace to proceed promptlyas we promised with each other.Thank you.