Human Rights Day 2016: We must achieve the cessation of war
through international law: Chairwoman of IWPG
(International Women's Peace Group)

According to several studies conducted by the United Nations,
it is women and children around war-prone areas whose human rights
are most commonly violated almost on a daily basis


Year after year, Human Rights Day is observed on 10th December across the world. Marking this occasion with a special theme on the role of women in world peace, the Confederation of Indian Bar held a discussion on the same on December 9, 2016 at New Delhi, with Justice A.K. Sikri, Supreme Court Judge as the Chief Guest and Chairwoman, International Women’s Peace Group as the Guest of Honour. Mr. Pravin H. Parekh, President, Confederation of the Indian Bar spoke on Human Rights Day. He also presented a memento to the Chief Guest – Justice AK Sikri, Supreme Court Judge

So, are you wondering how IWPG has anything to do with the celebration of Human Rights Day?

According to several studies conducted by the United Nations, it is women and children around war-prone areas whose human rights are most commonly violated almost on a daily basis – they are raped, beaten up, physically assaulted, exploited and so on. In this context, the IWPG is a well-recognized international gathering of women who are working towards establishing lasting peace and the organization is headed by IWPG Chairwoman who is from South Korea.

Emphasizing on the need to end all wars so that women and children can be spared from irreparable grief, sorrow and exploitation, stated as follows:

“ In times of war, it is women who suffer most. Now let us work together towards establishing a lasting peace. It is in our hands whether future generations inherit a legacy of everlasting peace or a future where they will suffer in wars. We must achieve the cessation of war through international law and the alliance of religions. ”

Further, she stated, “ With the heart of a mother, who gives birth and raises a child, and with the heart that loves life and cares about future generations, the IWPG has earnestly called for the cessation of war. If we step forward and make all-out efforts to achieve peace, world peace will quickly become a reality. We will definitely make it happen.
When light meets light, there is victory. ”

Posted by dynamicpeace at 22:03 No comments:

On 10 December voice on institutional expansion of peace education arose at “Youth and Women's Conference for Spreading a Culture of Peace”, which was held in New Delhi.

200 leaders from youth and women agreed to the necessity of implementation of international law for peace and cessation of war to protect innocent sacrifice and advocate for support of Indian society.

Participants gathered to present the achievement of HWPL peace education and campaign supporting Declaration of Peace and Cessation of War (DPCW) over the last two years in India.

Posted by dynamicpeace at 00:13 No comments:

I have been to Dadaepo Beach in Busan, South Korea.
I met a big size work of art there.
I would like to introduce 'Shadow of Shadow' of Young Won Kim.


All four sides of this work are the front.
That is, each side a viewer looks at is the front: there is no back.
A man with his back facing the viewer seems to look away on one side; a two-dimensional man appears to either overlap or stand alongside a three-dimensional realistic man on another side; a man appears or disappears on another; and a two-dimensional abstract man emerges only by his silhouette.

As such, each face of this work is made up of different concepts and images.
This work is characterized by an attempt to integrate and harmonize such diverse images.

I have brought a shift from a static space in sculpture to  a dynamic space. One cannot help but walk around my work as standing in front of it makes viewers curious about its back, something which is also one of its hallmarks.

This work well-received by visitors among 34 submitted exhibition works from 16 countries who participated in Sea Arts Festival 2015 (19 Sep. to 19 Oct. 2015. Dadaepo Beach in Busan, South Korea).

It has been displayed continuously for tourists to appreciate the work since then as the Sea Art Festival 2015 finished.

Posted by dynamicpeace at 20:37 No comments:

The Power of the DPCW


The Power of the DPCW,
Declaration of Peace and Cessation of War

WARP Summit 2016:
Passing on to Successive Generations a Legacy of Peace~!


“For the 2nd Annual Commemoration of the WARP Summit, we’ve come together. All family members of peace who have a strong will for peace must gather our hearts and communicate with each other for peace to be settled one day sooner, for it is what all humanity has been longing for. Just as a leader must lead his or her followers, they (family members of peace) are striving at the forefront to make a better world. If we do it, it’s possible. It we don’t do it, it won’t happen”
1,000 global people from 130 countries around the world participated in the Advocacy Forum for the Declaration of Peace and Cessation of War. The participants include former presidents and prime ministers, ministers and high-ranking officials of governments, specialists and leaders from international organizations, civil society, religion, women and media groups. Beginning with an opening speech by Chairman Man Hee Lee of HWPL, two parts of the forum for 4 hours sought peace building strategies based on "Plan of Action for Advocacy to Intergovernmental Organizations, Governments, and the Public."

The Potentiality of the DPCW
and the Possibility of its Implementation 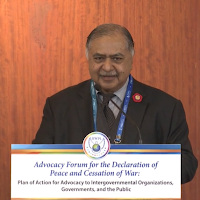 Dr. Kamal Hossain, Senior Advocate of Supreme Court of Bangladesh and member of HWPL International Law Peace Committee, stressed the importance of advocacy of international law for peace through the implementation of the DPCW. "We must make sustainable efforts for global mobilization and to combine the strength of the millions, who yearn for an end to violence and armed conflicts. ... To this end, topics surrounding the development of such legal framework should be discussed by the United Nations (UN) and other international and/or national organizations, in order to raise awareness among the public about the importance of world peace and security, as well as the contents of such a legal framework", he said.

Ms. Ediola Pashollari, Secretary General of World Assembly of Youth in Albania, said, "This Declaration (the Declaration of Peace and Cessation of War) is a powerful and ground-breaking tool to dispose of all means that initiate war and armed conflicts, thus further attaining humanity's fundamental goal and peace." She suggested that the promotion of value of peace and justice must be provided and said, "Another effective strategy is to make a petition that will reach out to the heads of state and make the Declaration of Peace and Cessation of War (DPCW) as a legally binding international policy. Finally, to be able to follow up and realise their vision this successfully, they should be a formation of regional representatives that will be building, encouraging and overseeing all stakeholders in order to ensure that the regions are actively involved."

Ms. Denise Robinson has dedicated her life to women rights, democracy and prohibition of racial discrimination as a minister and member of Parliament of South Africa and Federal Leader Democratic Alliance Women's Network (DAWN), For development of the DPCW(the Declaration of Peace and Cessation of War) with the support from the public, she said,
"In order for the DPCW to be implemented and start bringing the change which it was created for, it is imperative that the public be informed about the contents and goals of this document. This means that those of us who know this declaration now need to create situations like seminars and round table discussions around it. This should be done not forgetting the power of the media, which can carry the message much quicker and wider through radio talk shows on community radio stations, television panel discussions and social network campaigns. All these wonderful modern day tools should be harnessed to raise public awareness and offer education to our people as a first step."

Mr. Abdessatar Ben Moussa, President of Tunisian League of Human Rights, a representative civil society organization of the National Dialogue Quartetannounced as the laureate of the 2015 Nobel Peace Prize, emphasized the legislation through parliament or congress by saying, "The essential is to submit petitions to parliamentarians to collect petitions because parliaments are the efficient pressure methods concerning governments and Heads of States. Awareness of governments within each State is NGOs’ role. In this regard, we have to work on the acquisition of the Declaration support motion of each parliament. Support motions have considerable effect."


Chairwoman of the International Women’s Peace Group also appealed to the participants by saying, “War only gives birth to another war, leaving fear and sacrifices to our future generations. We must achieve our purpose, the advocacy for this Declaration, to not repeat the atrocities of war for the next generation. When the public’s awareness of this issue increases, the powerful strength of peace in the world will arise, transcending national interests. All heads of state, justices, and UN representatives must work at the forefront to advocate for the implementation of international law compatible with the DPCW.”

Posted by dynamicpeace at 19:56 No comments:

HWPL Chairman, Man Hee Lee, What Does He Emphasize?

Implementation of an international legal document compatible with the DPCW

HWPL Chairman, Man Hee Lee,
What Does He Emphasize?

HWPL Chairman, Man Hee Lee emphasized that the work of peace can no longer
be put off and that the leaders must take action beyond mere lip service.

"Although we pass down something valuable to the next generations, would it really be an eternal legacy? Only when we pass on to successive generations an invaluable inheritance of a world free of wars, will we meet our responsibilities as leaders, citizens, and people of today. The international community has to acknowledge what is delineated in the DPCW and then modify and develop the current international legal systems."

Posted by dynamicpeace at 23:00 No comments: 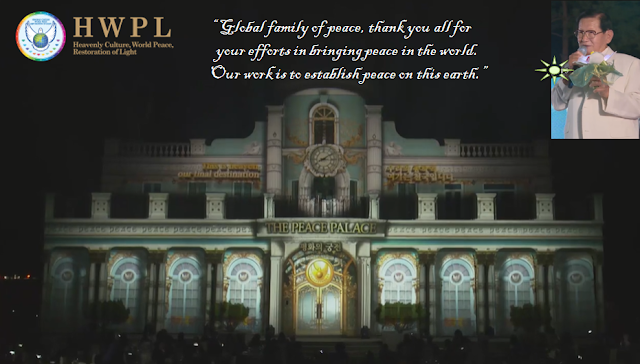 “Global family of peace, thank you all for your efforts in bringing peace in the world. Our work is to establish peace on this earth.

Let us become messengers of peace and achieve a peaceful world to pass down as an eternal legacy of peace to the future.

Once again, I ask Presidents of all States to sign your support for the Declaration of Peace and Cessation of War for its development and adoption.

I urge all people here to put forth our efforts for the work of peace to proceed promptly as we promised with each other.”

Posted by dynamicpeace at 02:01 No comments: