A Solution to World Peace

London Religious Leaders have a dialogue to find a solution


Religious leaders of the Muslim, Sikh, Hare Krishna, Jain and Buddhist faiths gathered
in one room to discuss the commonalities within their scriptures
in order to spread one message – World Peace. 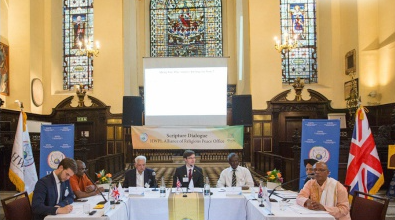 On Wednesday 27th July, Heavenly Culture World Peace Restoration of Light (HWPL), an international organisation in association with the United Nations Department of Public Information, hosted the 11th UK World Alliance of Religions’ Peace (WARP) Office in The London Spirituality Centre. The WARP Office is a series of Scripture Dialogues attended by religious leaders from various faiths who seek peace and a young adult audience who support peace.

The Scripture Dialogues are held every month and designed for religious texts to be compared and unified under the one that provides the most trustworthy testimony to prevent religious conflicts. Under the topic, The Inner Being, each religious leader gave a speech on questions “What is more important – Flesh or inner being?”, “Is there a concept of an inner being living and dying?”, and “What is the way for the inner being to live?”

As for the first question, all religious leaders said inner being is more important, while there were some differences regarding the other two questions.


Venerable Konwewe Ariyarathana said, “The Buddha taught a doctrine of no soul or no self. There is no part of a being which remains unchanged even for a split second. Change is going on constantly from moment to moment, so we cannot therefore talk about an inner being which has some kind of permanent or independent existence.”

Bhindu Madhava representing the Hare Krishna religion said, “Throughout the ages wise people have realised that we live in two worlds at the same time, a physical outer world and a deeper inner spiritual world. The problem is that we get so absorbed by the state of our physical outer world that we don’t spend enough time on the spiritual world within us. All religions message is the same, whichever religion you follow.”

After the event, Jain speaker Dr. Alhagi Drammeh said “There are differences but there are also similarities in religion and unfortunately people always focus on the differences rather than the similarities, within Islam, Christianity, Buddhism and all the other religions concerning ethics, compassion, forgiveness and doing good because I think all religion focus on the issues of morality and humanity and this has always motivated me since I was very young.”

In addition, Christian scholar Justin Brand said, “Every speaker here has said that taking care of the inner being is what is the most important – it is the same in Christianity. What unites us all is that every religion has had a founder who claimed to have discovered the absolute truth, that’s what unites us all, finding the absolute truth. The absolute truth has nothing to do with the external but has everything to do with the internal, the inner being, so after discussing with our Jain speaker Dr. Harshad, we came to the conclusion that we should start to look at our commonalities, every person has an inner being that is seeking to find the absolute truth and this is what I have discovered through attending these dialogues.”

In order to bring all conflicts to an end, the organiser HWPL is not only working on WARP Offices, but also “Legislate Peace” Campaign, an advocacy movement in support of the Declaration of Peace and Cessation of War (DPCW) being developed into an enforceable law. Through these two core peace projects of HWPL all over the world, those who love peace become united as one. Recently, 181 WARP Offices in 90 countries have been established and over 500,000 signatures have been gathered in 168 countries.