Together Religious Leaders in the Name of Peace

Forum Brings
Together Religious Leaders
in the Name of Peace

The Church of Scientology Los Angeles was among the 19 religions featured in a peace forum at the California State University of Fullerton Pavilion. The program was organized as part of World Interfaith Harmony Week by Heavenly Culture World Peace Restoration of Light (HWPL), the largest nongovernmental international peace organization.


LOS ANGELES, Feb. 15, 2016 /PRNewswire/ -- Scientologists were proud to participate in an interfaith forum at California State University of Fullerton, organized by Heavenly Culture, World Peace, Restoration of Light (HWPL) in honor of World Interfaith Harmony Week. HWPL is the world's largest non-governmental international peace organization. The purpose of the forum was to engender understanding among religions and promote world peace. 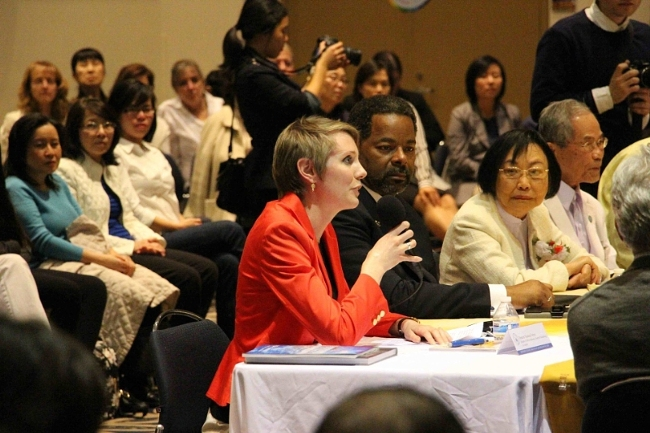 The Rev. Susanna Furios from the Church of Scientology of Los Angeles was one of the guest speakers representing 19 different faiths, including Hinduism, Islam, Sikhism, Zen Buddhism, Christianity, Hari Krishna, and Scientology. Also attending were students from the University and members of the local HWPL chapter.

The forum was opened with a skit performed by the youth, demonstrating the various ways that conflict has been generated and blamed on religion, giving visual examples of war, protests, and domestic conflicts—all alleged to be created by differences in religious beliefs.  The skits demonstrated very clearly that conflict is caused by people, not religion.

All present were invited to learn from the many religious scholars present to gain understanding of the different religions, and see how all beliefs can work together to create world peace.

Each religious leader was then invited to speak about the common thread that unite faiths in their beliefs.  Several additional religious leaders joined in by Skype, making it a live international event.

Rev. Furios was very pleased with the results of the forum, which she said, "provided a way for people of various faiths and religions to openly communicate with each other and bring about understanding, tolerance and the agreement that world peace is possible."

After the presentation, the more than 300 people attending joined hands to proclaim their agreement that world peace can be achieved.