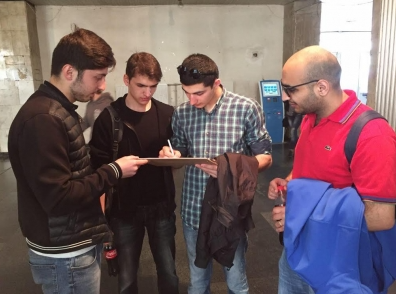 Tbilisi – June 4th , 2016 – The 1st HWPL Short Film Festival will be held featuring theme of peace at the Amirani cinema. Through the short film festival, anyone who want to express their thinking about peace issue would have chance to present their film works and this opportunity will be culture platform for victory of peace. This is organized Heavenly Culture, World Peace, Restoration of Light(HWPL) which is an international peace organization based on the South Korea.

Many short films are now underway actively and anyone can participate in the contest regardless their age, gender, faith, ethnic bondaries and so on. They are requested to submit from 3 to 10 minutes films until the end of May. The winner of the three nominations will be awarded the Best film, Best director and Best actor prize and there will be special nominations like HWPL Award, ICC Award, Refugee Award and so on. The festival will award all winner statues designed by Mr. George and all participants will get the certificate also.

Through discussion of jury members of the festival, about 10 works will be decided to be screened publically. Every day, a number of artists, film professionals and sponsors are growing with expectation. This film festival is practical achievement of the culture of peace that is specified in Article 10 of the Declaration of Peace and Cessation of War.

As the cultural form of event: It will suggest a turning point in the history of humanity that has commemorated war until now, and it will inspire the public with mentality of HWPL is an international peace organization and leaders from all levels along with the youth and women all work together.

HWPL hosted the HWPL World Alliance of Religions’ Peace Summit in September 2014 with around 2000 leaders worldwide and held the ‘Signing Ceremony for the Agreement to Propose the Enactment of International Law’. The HWPL International Law Peace Committee was established and the draft of the international law was proclaimed within a year.

Six months later, on March 14, 2016, the Declaration of Peace and Cessation of War was proclaimed. The Declaration contains contents such as proposal of answers to religious conflicts and spreading of the culture of peace, and urges for the support of current heads of states. This declaration will also be sent to Giorgi Margvelashvili, the current president of Georgia.