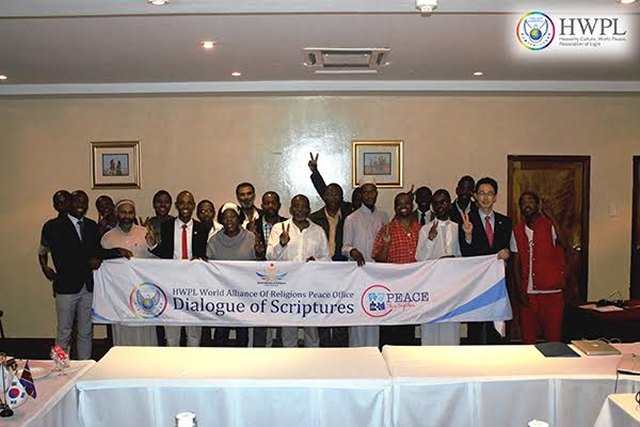 
MBABANE – Heavenly Culture World Peace (HWPL) held the 2nd World Alliance of Religions’ Peace (WARP) Office meeting in Swaziland last month.Religious leaders representing Judaism, Hare Krishna, Christianity, and Islam participated in the Dialogue of Scriptures at WARP Office. The objective of the WARP Office is to bring religious leaders together and become one by seeing what makes scriptures and religions believable.

Together they declared, “To do everything in their power to end all wars on this earth and to establish world peace according to the will of the Creator, God through the unity of religions.”

The WARP Office meeting in Swaziland attracted a lot of attention as the religious leaders and participants in attendance had a special time to study the similarities and differences among each other’s faith. The theme of the dialogue was “The reason why we believe our Scripture”.

The participants had their questions on each religion’s scripture after the dialogue, but moreover, they were impressed because it was a dialogue based on the religious scriptures. They said they were able to understand many religions through the dialogue.

One of the guest speakers, Rabbi Geoff Ramokgadi, Vice President of African Jewish Congress said “Peace is achievable through the way the dialogues are being approaching. We just have to work hard and show people in the world that we cannot refresh the world without peace. HWPL is doing fantastic peace work and I just wish that organizations like the UN would recognize it and help them.”

Saeed Mathabula from the Islamic religion, “It’s achievable because we are a living proof of Swaziland. With tolerance and understanding we can achieve it. We are against each other but now we are a family, small family as it is but we are a family”.

One of the audience Sagihar Muslim resident said, “Yes, it is achievable, but I think next time you should have some politicians, because they are responsible for the countries. It is the geopolitical problems of the world, and we as Muslims are suffering. We do need Peace. Maybe 30 – 40 years ago it was quiet, but now one thing finishes and another one starts. But we pray that it all ends soon.”

HWPL is an international peace organization registered in the Department of Public Information of the United Nations (UN DPI) and initiating peace works together with the International Law Peace Committee, World Alliance of Religions’ Peace (WARP) Office, International Women’s Peace Group (IWPG), and International Peace Youth Group (IPYG). HWPL WARP Offices are taking place in over 100 countries around the globe.

On the 14th of March, Chairman Lee proclaimed ‘The Declaration of Peace and Cessation of War’ in Seoul, South Korea. The declaration consists of 10 articles prohibiting wars. One of the articles urges states to foster religious freedom by allowing members of religious communities to practice their religions as well as the solving of religious battles. – http://hwpl.kr/, http://peacelaw.org/