For Peace on the Korean Peninsula 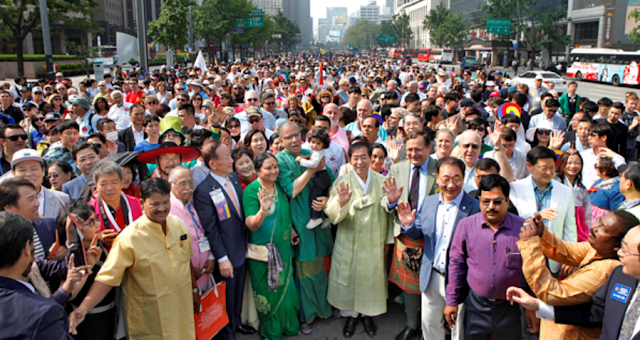 Some 5,000 Rotary International members from more than 60 countries along with Seoul Mayor Park Won-soon, Rotary International President K.R. Ravindran and ambassadors and senior diplomats together participate in the 3-kilometer (1.8-mile) Walk for Peace in central Seoul on Saturday, marching in solidarity for peace on the Korean Peninsula and around the world. [PARK SANG-MOON]


Joined by citizens and senior diplomats alike, thousands of Rotarians clad in traditional dress waved flags and marched through Seoul on Saturday to wish for peace on the Korean Peninsula and beyond.

The 3-kilometer (1.8-mile) peace walk with some 5,000 Rotarians, or Rotary club members, from over 60 countries commenced the five-day Rotary International Seoul Convention.

“Seoul is excited to host a festival for Rotary International, celebrating a history of over 100 years with 1.2 million members,” said Seoul Mayor Park Won-soon, sporting a jade green hanbok, or traditional Korean attire, while addressing the crowd at Seoul Plaza.

“We walk today wishing for a world without war, a peaceful planet and peace in Korea.”

Parading alongside a traditional Korean instrumental ensemble and royal procession, the Rotarians sang their national songs and waved their countries’ flags as they passed Cheonggye Plaza and the Statue of Admiral Yi Sun-shin before arriving at Gwanghwamun Square.

Ambassadors and senior diplomats in Seoul joined the cause.

“The United States strongly supports peaceful reunification of the Korean Peninsula under a democratic government and free-market economy,” said U.S. Ambassador Mark Lippert. “But beyond that, we also think it is significant that Seoul is now seen as a global capital hosting these types of international conferences.”

“A Rotary convention bringing 30,000 people to Seoul is a milestone in its efforts,” said German Ambassador Rolf Mafael. “And the peace walk which I am part of today signals to all Koreans in the North and South that peace in Korea is very important for the rest of the world.”

Walking alongside the dignitaries of Ghana, Kenya, the United Kingdom, Ireland, Zambia, Japan, Egypt and Mexico, the marching Rotarians each brought the flavors of their home countries. “This is called a china dress, a typical Chilean dress,” said Marina Sanchez. “And don’t pronounce that as in the country China.”

Sanchez and her fellow Chilean Rotarian Rosa Gueren waved their handkerchiefs in the air to demonstrate la cueca chilena, a national dance of the country.

“Little ambassadors of our country, that’s who we are,” said Yolanda Ibarra, a 17-year-old from Mexico participating in the Rotary Youth Exchange program in Korea. Ibarra and her two colleagues from France proudly wore blue jackets covered with pins and badges traded with other students or acquired in each country they visited.

Groups of Korean students also stood out among the crowd in their matching school uniforms.

“It’s great to see the rest of the world getting together to wish for peace,” said Lee Da-hee, 17, an Interact member who attends Sungshin Girls’ High School in Gyeonggi. Interact clubs are Rotary-sponsored community service clubs for those aged 12 to 18. In Seoul alone, there are 731 Interact clubs and 202 Rotaract clubs.

“I joined Rotaract after my Laos trip, which sparked my interest in community service,” said Hong Jang-hun, 26, a Rotaract member. “It’s really heartening to see thousands of Rotarians from all over the world marching for peace here.”