The Legislate Peace Campaign
Calls on World Leaders
and Governments 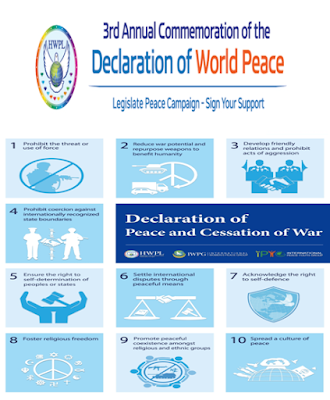 300,000 people gathered simultaneously in hundreds of cities including Seoul, New York City, Sydney, and Shanghai for the 3rd Annual Commemoration of the Declaration of World Peace: Legislate Peace Campaign hosted by HWPL on 25 May 2016 in their respective time zones.

This year’s commemoration at the World Peace Gate in Seoul Olympic Park highlighted the global peace advocacy movement, Legislate Peace Campaign, recently launched to bring all wars to an end by establishing an enforceable law compatible with the Declaration of Peace and Cessation of War (DPCW).

The DPCW is unique in that it includes provisions aimed at resolving conflicts, reducing war potential, repurposing weapons to benefit humanity and inviting all citizens to participate in the active promotion of a lasting culture of peace.

The Legislate Peace Campaign calls on global citizens to unite as one to voice their demand for peace by adding their signatures. According to HWPL, as of May 25th, the collected signatures have exceeded 500,000 from 154 countries in less than two months and many heads of state have written official letters of support for the DPCW. The number of signatures is expected to reach 2,000,000 by the end of this year.

“Today, marking the 3rd anniversary, at this very moment, our family of peace must be having their eyes and ears in this place…What we are ought to leave to our future generations is the common good of mankind, peace. There is no greater legacy than peace and it is not achieved by one person. Therefore, we all must become messengers of peace,” said Chairman Man Hee Lee of HWPL in his commemorative address.

Since the proclamation of the Declaration of World Peace on 25 May 2013, HWPL has proposed its international law initiative. It is to draft a legally binding instrument which ultimately promotes a culture of peace and ceases all wars through the DPCW so that all states would adopt it as national law. A Korean youth leader said at an interview, “The organization has already made great progress in achieving its peace initiatives. It’s exciting to see what the next work will be.”

The event in Seoul was live streamed through the HWPL homepage and real-time photos and videos have been posted on the Legislate Peace Campaign Facebook page.

Legislate Peace Campaign is an advocacy movement in support of the Declaration of Peace and Cessation of War (DPCW) being developed into an enforceable law. The campaign calls on world leaders and governments to make and enforce a law based on the principles of the DPCW.