Answer in the Scriptures

Is there an Answer in the Scriptures to Solve the Matter of the Illness, Pain?

"What is the cause of 'Life, Aging, Illness, and Death' in your Scripture?"

"Birth, Aging, Illness, and Death are all mentioned in the Quran. All these are the parts of the scheme that our creator put in place. In the case of Aging; it is he who decides, who dies young and who attends old age.
And Illness is something that is a part of his scheme, as it is also Allah who cures illness," answered Prof. Dawud Noibi(Christianity/Pastor of Grace Church) said, "God created human in his own image and likeness. Therefore there was no death, pain or illness for human. In Genesis Chapter 3, however, it says that Adam fell into the temptation of the serpent and committed the ultimate sin of breaking the covenant with God by eating the fruit from the tree of the knowledge of good and evil, which God said never to eat. Due to this sin God had no choice but to leave. Because God, who is the source of life, left, the days of suffering from 'birth, aging, illness, and death' started." It is interesting to note that in Islam, aging and illness are still under the divine providence of God, while in Christianity, suffering has come to human beings when God who is the source of life left due to sin.

"Is there an Answer in the Scriptures to Solve the Matter of the Illness, Pain?"


Prof, Dawud Noibi said, "God states in Quran 17:9 that he has sent the Quran as a guidance. The most important thing and the only way that we can avoid all kinds of evil(illness) that confront us in this world is to follow the guidance contained in the Quran." Dr. John Edidaha (Christianity/ Pastor of Bible Believers Centre International) answered, "Obeying God's instruction is the answer." Mrs. Sarah Mun said, "It is recorded that only through the blood of Christ we can be free from illness and death (1 John 1:7). In Christianity, it is told that all people have three sorts of sin; original, inherited and self-committed. To be free from the restraints of the 4 phases, we have to eliminate these three sins. And in the New Testament, we need to believe in Jesus, who was crucified for our sins, and worship God in spirit and in truth."

In order to avoid the suffering of the 4 phases of mankind, in Islam Allah gave the Quran as a guidance, and in Christianity. Jesus Christ who had no sin was crucified for sinners. As the discussion progressed, we were able to further hear from both Islamic and Christian representatives if there had been a real case where 'birth, aging, illness and death' was solved through the Quran, and also the reason why humans are not freed from the 4 phases, even though 2,000 years has passed since Jesus's death.


"Is There Any Records about a Case or a Person Who Solved the Matter of the 4 Phases?"

Prof. Dawud Noibi answered, "There is no answer to who solves the problem of the 4 phases of life." Dr. John Edidaha said, "Jesus is the answer. God through His Son Jesus Christ." Mrs. Sarah Mun also said "Jesus" was the answer and explained that "Jesus, the son of God was crucified and was resurrected form death to life. He overcame death and was reborn. With this, Jesus was able to free himself from the restraints of the 4 phases, and became a new form. It is recorded in the bible that he cured many ill people." Through the speeches delivered by the speakers representing Christianity, we were able to know that Jesus Christ was the main example of someone who overcame the restraints of the 4 phases. "How can Jesus solve the 4 phases for other people?" This question brought a point of curiosity among the participants.

Prof. Dawud Noibi said, "Indeed it is the responsibility of religious leaders to teach their followers. Islam teaches us that the extent to which one gives good example to others to follow will determine the reward they will receive from God on the day of resurrection. I appreciate Chairman ManHeeLee and HWPL for hosting this kind of conference. It was really lovely and I believe it was a successful one." Mr. Suji Adebowale(Christianity/ Pastor of Church of God Mission International) confessed "At the end of the day we have discovered that ultimately the expansion of this type of dialogue session will further settle down war, killing, and destruction in the world." 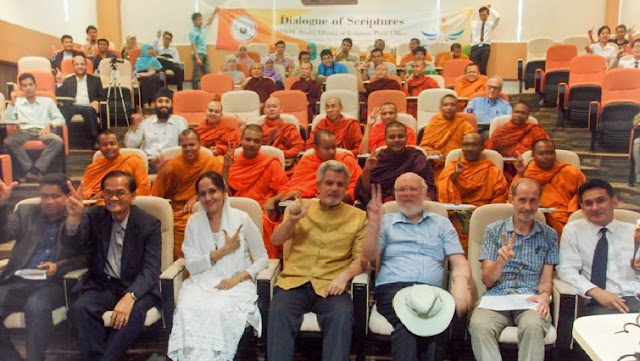