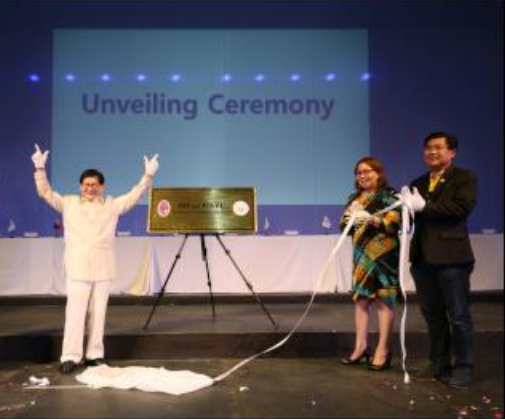 HWPL Peace Delegation’s peace tour in Philippines has been proceeding for eight full days, reaching its curtain call today on January 29. HWPL Chairman Man Hee Lee and the peace delegation had peace talks with Mayor Ronnel Rivera of General Santos City at the Green Leaf Hotel. "The Mindanao Peace Agreement which was concluded in General Santos City was the starting point of all peace works in Mindanao," said Chairman Lee, asking for the future cooperation to bring out a bigger wave of peace in General Santos.

Being appointed as an HWPL Publicity Ambassador, Mayor Ronnel Rivera promised to cooperate in the peace movements in the local communities.

Also the Peace Delegation met Mr. Manny Pacquiao, the world-renowned Filipino world champion professional boxer. Also a member of the Philippine House of Representatives in Sarangani province, Mr. Pacquiao invited the HWPL Peace Delegation to his house. After the meeting, he has promised to cooperate for justice and peace in the Philippines as an HWPL Publicity Ambassador.

Meanwhile, the Integrated Bar of the Philippines (IBP) has launched the HWPL National Committee on Peace in IBP and celebrated a signboard hanging ceremony. The launching ceremony took place at the South Cotabato Gymnasium with more than 200 representative attorneys of each IBP branch. The IBP has appointed Chairman Lee and IWPG Chairwoman as advisers of the committee and HWPL has appointed 9 Board of Governors and 84 representatives of the IBP branches as the HWPL Publicity Ambassadors.

Jose I. De La Rama, JR, the Governor for Central Luzon, who became the head of the board of HWPL National Committee on Peace in IBP, announced the committee's future action plan to the audience by urging to support the implementation of an International Convention on the Renunciation and Cessation of War and International Armed Conflicts, HWPL’s core initiative.

■ Purpose of the Event

-Building a solid foundation in General Santos City to spread peace movements throughout the Mindanao Island.

The Mayor of General Santos City was appointed as an HWPL Publicity ambassador, promising to work together by erecting the Monument to the Declaration of World Peace and designating Peace Academies.

HWPL(Heavenly Culture, World Peace, Restoration of Light, Chairman: Man Hee Lee)
An international peace organization registered in the Department of Public Information of the United Nations (UN DPI), initiating peace works together with the International Law Committee, World Alliance of Religions' Peace (WARP) Offices, International Women's Peace Group (IWPG), and International Peace Youth Group (IPYG).
IBP(The Integrated Bar of the Philippines) -The Integrated Bar of the Philippines (IBP) is the official organization of all Philippine lawyers whose names appear in the Roll of Attorneys of the Supreme Court.