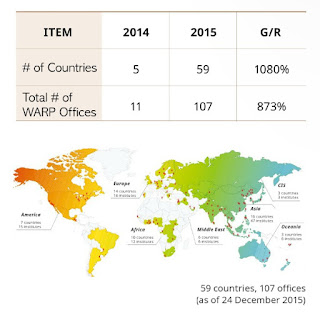 Year 2014 marked the starting point of opening WARP Office meetings. Considering the fact that 80% of all present conflicts are rooted in religious differences (religious misunderstandings) EARP Offices are one of HWPL's practical solutions for a peaceful world. Staring as pledges of unity among religions, these agreements spurred religious leaders to open 11 WARP Offices spread across 5 countries in 2014 alone. In 2015, the number quickly grew to 107 WARP Offices spread across 59 countries. The number of participation countries in 2015 grew by 1080% and the number of opened WARP Offices grew by 873% compared to those in 2014. Detailed discussions took place and yielded the outcomes of 'Scripture Dialogues' which are used to inform people about the fundamental aspects of different religions, religious practices, and to provide guidance for future discussions.