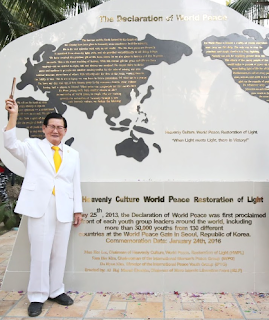 Keynote messages delivered by Chairman Ebrahim and Chairman ManHeeLee are both inscribed on the Monument along with the Declaration of World Peace which was proclaimed by Chairman Lee on May 25, 2013 in Seoul, South Korea before 30,000 people from 130 different countries, announcing the practical methods to achieve world peace.“This monument has been built on this hallowed ground to honor the people of the Bangsamoro who struggled for justice so that all the communities of Mindanao and Sulu – Muslim, Christian, and Lumad – will live in peace. Furthermore, this monument stands as a testament of support by the people of the Bangsamoro for the ‘International Law (Convention) of World Peace’ advocated in the United Nations by the Heavenly Culture, World Peace, and Restoration of Light (HWPL) led by Chairman ManHee Lee of South Korea,” presented by Chairman Ebrahim.

“Today, where people are suffering from wars and conflicts, all leaders of diverse sectors including politics and religions, are taking part in the peace movements of HWPL by implementing an international law on cessation of wars and world peace, and establishing the HWPL World Alliance of Religions' Peace (WARP) Office, as a follow-up on the pledges they made before God and all people.

Peace is not a matter confined to a single person but to every individual. Therefore anyone who is part of this global family must all become messengers of peace. Let us all participate and become the messengers of peace to pass on peace as an eternal legacy for the future generations!”

Furthermore, ‘HWPL Day’ was designated not only in Maguindanao in the Philippines but also in Carson City, LA and Alexandria, VA in the United States, the Royal Bafokeng Nation in South Africa, as well as in Santa Tecla, El Salvador.