HWPL, Heavenly Culture, World Peace, Restoration of Light is a non-governmental, non-profit organization registered under the Korean Ministry of Foreign Affairs that transcends differences in culture, belief and region to engage leaders and youth in sustainable and comprehensive solutions for peace. 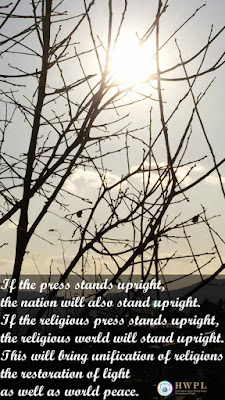 When the report on world peace, restoration of light through the culture of heaven Peace Movement was introduced on TV, broad casting companies flocked from all over Africa to be guests on the show. Just in South Africa 20 TV and radio stations asked to be on their show, and the delegation appeared. Within one day, they appeared on more than 10 broadcasting shows. As soon as the interview was finished, reporters from far away came to interview the delegation, and some even came to the rooms where they stayed for interviews.

Even so, there weren't enough time to do all interviews. Each time the news reporters and announcers interviewed Chairman of HWPL, Man Hee Lee, they were very moved that at the end of the show or program they would ask to hug him and wouldn't leave right away but stayed. They wished to express how honored they were to have a chance to interview him. South African's national broadcasting company SABC's CEO even came running out to meet him and asked for a hand shake.

One reporter was amazed by HWPL Chairman Man Hee Lee's world peace activities and thought was similar to Nelson Mandela and wanted to keep interviewing him. And another producer of a national broadcasting company said all the journalists of the world should be in the front line to let people know of person like Chairman of HWPL ManHeeLee, and claimed that it was their job and duty.


This behavior was the opposite compared to journalists and reporters of Korea who were blinded by the authorial power and money.