Esmael G. Mangudadatu Speech at the 1st Annual Commemoration of WARP by HWPL


Esmael G. Mangudadatu Speech
at the 1st Annual Commemoration
of WARP by HWPL 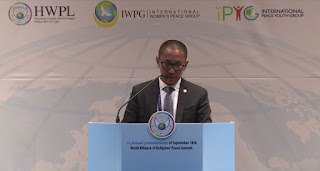 
On January 24th 2014, the province of Maguindanao and HWPL have successfully achieved the Mindanao Peace Agreement which marked the start of peace.
On September same year, I participated the World Alliance of Religions' Peace Summit(WARP) hosted by HWPL and signed a peace agreement promising to cooperate more actively for peace.

To keep what I have promised at the Summit, I started planing out peace activities as soon as I came back to the Philippines.

Consequently, on May 25th this year, I invited both Chairman of HWPL,  ManHeeLee and Chairwoman of IWPG, to celebrate the proclamation of January 24th as the HWPL Day of province of Maguindanao.

Thereby, province of Maguindanao became the province of peace and starting with Maguindanao, I believe Mindanao Island will be gradually becoming into a land of peace.