Phumzile Mlambo-Ngcuka, chief of UN Women, told a security council meeting women were ‘perhaps the most under-utilised tool we have for building peace’ 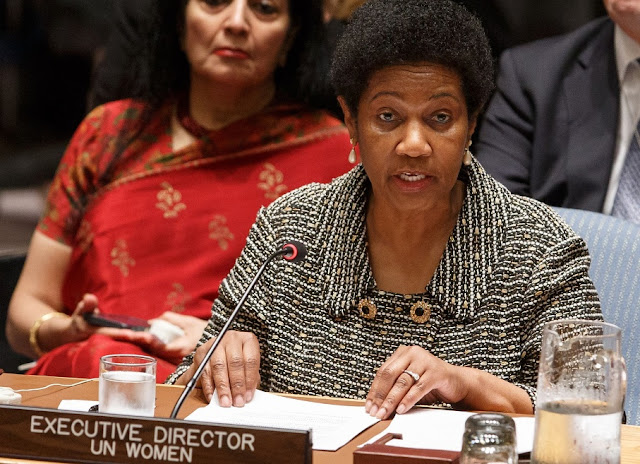 
The head of the United Nations women’s agency is criticizing the low level of women’s inclusion at peace tables, 15 years after a landmark UN resolution.

The resolution called for women to be included in decision-making positions at every level of peacemaking and peace building.

Phumzile Mlambo-Ngcuka, chief of UN Women, told a security council meeting on Tuesday that women were “perhaps the most under-utilized tool we have for successfully building peace”.

Alaa Murabit, who heads an organisation called the Voice of Libyan Women, blamed member states for continuing “to ignore the one tool that has never been more urgent for us to utilize: the participation of women”.

“From my own experience in Libya, I know the only reliable requirement for admission to peace talks is a gun,” she told the council at the day-long meeting which the UN said had the highest number of speakers ever: 113.

Julienne Lusenge, who heads a coalition of women’s organisations in conflict-torn Congo, said women from North Kivu province asked to take part in peace talks with M23 rebels in 2013 but were told there were only two sides to the conflict: the government and the rebels.


"There will never be lasting peace without the participation of women."


“You need to take up arms to be at the peace table,” she said.

Lusenge warned: “There will never be lasting peace without the participation of women.”

The Nato deputy secretary general, Alexander Vershbow, said the UN passed the resolution in 2000 because of the “brutal fact” that “it is more dangerous to be a woman in a conflict zone than it is to be a soldier”.

While Nato has taken steps to implement the resolution, he told the council more must be done. With the world facing increasing “violent extremism and terrorism”, Vershbow said, “it will be women, once again, who are most at risk”.


Mlambo-Ngcuka said a recent global study showed women’s participation at peace tables “is still symbolic or low” – and that a lack of political will, financing, accountability and attitudes toward women continued to be obstacles.

The study showed women’s leadership and participation at peace tables ensured the inclusion of community needs, improved humanitarian assistance, contributed to the conclusion of peace talks and enhanced economic recovery after conflict, she said.

Libya’s Murabit said the world could learn a lot from the ongoing peace process in Colombia which brought victims and their experiences to the negotiating table – 60% of them women.

A British-drafted resolution adopted unanimously by the council on Tuesday calls on member states “to ensure increased representation of women at all decision-making levels in national, regional and international institutions” dealing with preventing and resolving conflicts. It also calls for greater council oversight and increased funding.