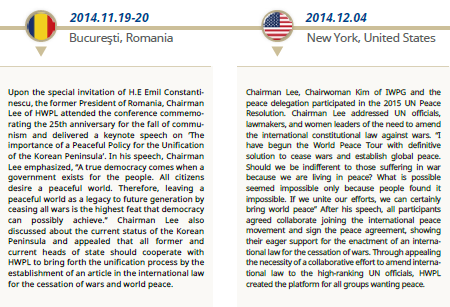 Upon the special invitation of H.E Emil Constantinescu, the former President of Romania, Chairman ManHeeLee of HWPL attended the conference commemorating the 25th anniversary for the fall of communism and delivered a keynote speech on ‘The importance of a Peaceful Policy for the Unification of the Korean Peninsula’. In his speech, Peacemaker ManHeeLee emphasized, “A true democracy comes when a government exists for the people. All citizens desire a peaceful world.

Therefore, leaving a peaceful world as a legacy to future generation by ceasing all wars is the highest feat that democracy can possibly achieve.”

Peace maker, ManHee Lee also discussed about the current status of the Korean Peninsula and appealed that all former and current heads of state should cooperate with HWPL to bring forth the unification process by the establishment of an article in the international law for the cessation of wars and world peace.


HWPL News, the passion of world people through peace walk.

Chairman ManHeeLee of HWPL, Chairwoman of IWPG and the peace delegation participated in the 2015 UN Peace Resolution

Chairman ManHeeLee, Chairwoman of IWPG and the peace delegation participated in the 2015 UN Peace Resolution. Peacemaker, ManHee Lee addressed UN officials, lawmakers, and women leaders of the need to amend the international constitutional law against wars. “I have begun the World Peace Tour with definitive solution to cease wars and establish global peace.

Should we be indifferent to those suffering in war because we are living in peace? What is possible seemed impossible only because people found it impossible. If we unite our efforts, we can certainly bring world peace” After his speech, all participants agreed collaborate joining the international peace movement and sign the peace agreement, showing their eager support for the enactment of an international law for the cessation of wars.

Through appealing the necessity of a collaborative effort to amend international
law to the high-ranking UN officials, HWPL created the platform for all groups wanting peace.