Carson City Council declared
May 25 to officially
be “HWPL Day”

Carson City Council declared May 25 to officially be “HWPL Day” in recognition of ManHeeLee’s global peace work accomplished through the organization. 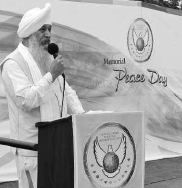 May 25, 2015 ? Los Angeles, Calif. ? This Memorial Day, unity across cultures and religions for peace became a reality through “Memorial Peace Day” hosted by Heavenly Culture World Peace and Restoration of Light (HWPL) at Veterans Park in Carson, Calif.

The event held prayers and performances from major religions of America, as well as cultural performances to represent America’s rich melting pot of diversity. “The common goal that unites us together is the desire for peace,” said Deja Brown, a Carson resident and HWPL volunteer. “From the soldiers who bravely sacrificed their lives, to the different religions and cultures here today, we all want peace.”

The highlight of the event was the signing of a 16-foot-tall peace agreement by national and local leaders in government, religious affiliations, and the community. The peace agreement presentation stood in the Veterans Park as a steadfast proclamation of the people’s united effort toward a future of peace.

May 25 carries significance as the day the World Peace Declaration was declared for the first time in Seoul, South Korea, on May 25, 2013, by HWPL Chairman ManHeeLee.
This year, Carson City Council declared May 25 to officially be “HWPL Day” in recognition of ManHeeLee’s global peace work accomplished through the organization. 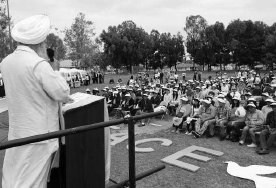 At the finale, the HWPL regional director read a letter that Chairman Lee addressed to the event’s attendees, saying, “Today, we commemorate the second annual Declaration of World Peace which HWPL declared on May 25. Together, people around the world are shouting for peace. This is the result of the diligent efforts made by the family of
peace? by all of you.”

Among the keynote speakers and special guests were Senator Isadore Hall, Mayor of Carson Albert Robles, and Mayor Pro Tempore of Carson Elito M. Santarina. Religious leaders representing the faiths of Sikhism, Islam, Hinduism, Catholic, Christianity, and Buddhism, as well as the Carson High School JROTC were also in attendance.

HWPL is a non-governmental, non-profit organization registered under the Korean Ministry of Foreign Affairs that transcends differences in culture, belief and religion to engage leaders and youth in sustainable and comprehensive solutions for peace. HWPL’s volunteers are stationed in 73 branches worldwide.