Press Conference On the 1st Commemoration of WARP Peace Summit 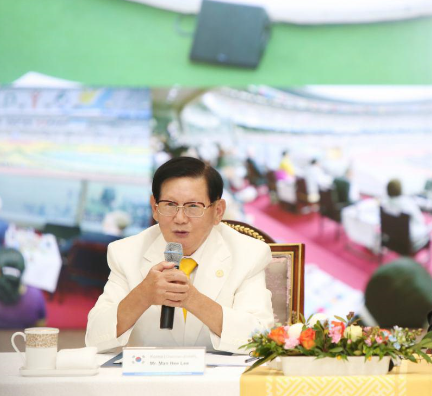 ☆
GYEONGGI, SOUTH KOREA – Heavenly Culture, World Peace, Restoration of Light (HWPL), a non-governmental peace organization registered under the UN Department of Public Information (DPI), is hosting the 1st Annual Commemoration of September 18th World Alliance of Religions’ Peace (WARP) Summit. The two affiliates of HWPL, the International Women’s Peace Group (IWPG) and the International Peace Youth Group (IPYG), organized the Summit. Prior to the first day of the official event, on September 17th 2015, a press conference was held at the Peace Palace in Gyeonggi Province, Korea. Over 30 journalists, reporters, and chief editors from major international broadcasting stations representing 15 countries came to report about the Summit and interview Chairman Lee, of HWPL, and organizing representatives.


☆
Elizabeth Costales Cachin, a journalist of PTV from the Philippines asked about the purpose of HWPL and the duty of the press and media in stopping armed conflicts and achieving world peace. Chairman Lee said, “First of all, we have to carefully examine what is behind the scenes of armed conflicts. In order to stop wars, a rigid system is needed to bring forth a practical solution for peace. That solution is the international convention on the cessation of war and achievement of world peace. The purpose of HWPL is to bring about the cessation of war and establish peace as an inheritance for future generations. Certainly, world peace will be achieved if all reporters are accountable for accurate reporting standards and continually report on peace.” Chairwoman Kim of the IWPG added, “All reporters and journalists have to become the eyes and mouths of all people to widely deliver the message of peace accurately and quickly. This is the responsibility of the media.”

Suraj Bhattarai, English News Editor of Himalaya Television in Nepal also asked about the roles of IWPG and IPYG in urging the implementation of the convention on the cessation of war. Chairwoman Kim replied, “A bird cannot fly with only one wing. Likewise, IWPG and IPYG serve as the two wings of peace, making it possible for HWPL to soar. We have clearly seen that the development of weapons and armed forces have not guaranteed to bring peace to us. If we continue what we’ve been doing, we will not only inherit a world of war but also the destruction of mankind for our future generations. Therefore, we call women and youth of the world to sign a statement to urge for the implementation of the convention on peace. We will work until the time when we can inherit a sustainable peace as an eternal legacy for our children.”