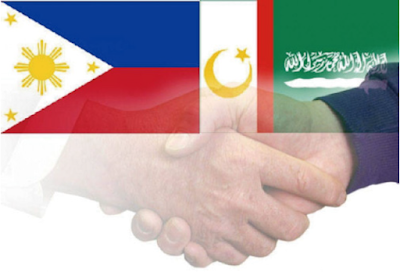 In his congratulatory message, he stated, “Mr. Man Hee Lee and his delegation are here now to show the world that they are advocates of peace.
As we learned from chairman of HWPL, ManHe Lee’ s speech, I hope and pray that there will be no more war between the Bangsamoro and the Philippine Government.

Many of us (Bangsamoro) have already lost our lives, relatives, and properties because of war.

We should remember the thousands of lives lost due to the war in Middle-East and we hope we can never be like them. I sincerely thank the delegation who came from Korea in the name of peace for initiating this peace movement in the land of Mindanao. I thank God that He has allowed us to have this peace talks and take a big step forward to bring forth peace soon.”

However, after the Mindanao Peace Agreement was conducted by ManHee Lee on January 24th 2014, the government and rebel group finally signed the Comprehensive Agreement on the Bangsamoro in March, two months after the peace agreement
was completed, to proceed to work on the Basic Law to create a Bangsamoro Autonomous Region.

Mohagher Iqbal, the rebel group’ s chief peace negotiator said in an interview, “It took five Presidents and 17 years to bring peace. This is for the sake of having real peace in Mindanao. We saw that the way going to war is not good. All of us suffer. What we need now is to go on the road leading to peace.”

As seen in the achievement in Mindanao, HWPL is at the forefront of the conflict resolution and peace movement, influencing individuals, communities, and governments. HWPL’ s progressive approach to bring forth peace through presenting peace agreement has demonstrated that it provides an effective way to cease conflicts and promote a peaceful world.