However, it was time for him to go to Thailand because Mr. Man Hee Lee and peace delegation were invited to the celebration of the Supreme Patriarch's 100th birthday anniversary by the secretary general of Thai Buddhists.

Peace advocate Man Hee Lee and his delegation flight was already booked and the time for them to leave was near. So for this reason, they promised to visit Mindanao next time, and Man Hee Lee continued on to Thailand. Thailand is where the headquarters of Buddhism is located.

Peace advocate Man Hee Lee also presented a lecture to him, also well as at a Buddhist university, and had a discussion with the religious leaders. His peace delegation pinned peace badges on the chests of the people Man Hee Lee had met there. They signed the peace agreement and even came to see us at the hotel day and night, and promised to work for peace together.

Afterwards, Man Hee Lee and his peace delegation traveled to Europe from Thailand. There we had meetings with various religious leaders and received their signatures on the peace agreement.

On January 23, 2014, Man Hee Lee and his peace delegationand went to Manila, the capital of the Philippines,,, 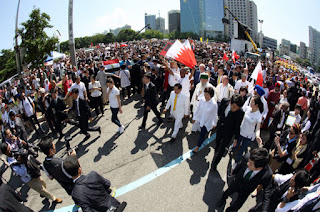