WE HAVE A POWER TO CHANGE THE WORLD! 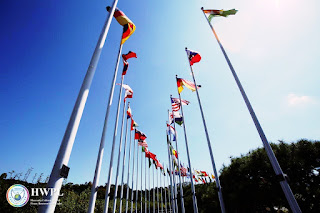 South Korea- The grand opening ceremony of the 1st Annual Commemoration of September 18th World Alliance of Religions’ Peace (WARP) Summit was followed by the Women and Youth Leaders’ Conference for Development of an International Convention on the Cessation of War and Achievement of World Peace in the afternoon of September 18th 2015. Over 200 women and youth group representatives from all over the world gathered together to sign the statement to urge for the implementation of such a convention, demonstrating their eager support. In order to save all youths from being victimized by war, women and youth participants promised to promote this peace movement and encourage the international community to support the convention on the cessation of war.

Exactly one year ago, on September 18th 2014, HWPL provided a platform where numerous world leaders gathered in one place to sign a pledge in support of a draft for a ‘Proposal to Implement an International law for the Cessation of War and World Peace’. While last year’s Summit included in-depth peace discussions covering various sectors of society, the 1st Annual Commemoration of September 18th WARP Summit will feature the presentation of the first draft of the Convention on the Renunciation and Cessation of War and International Armed Conflicts.

At the Women and Youth Leaders’ Conference, Chairman ManHee Lee of HWPL said, “Countless people have taken proactive steps in leading peace movements, however, unfortunately peace still remains as a far-reaching goal today. The reason for political and religious leaders, youth and women leaders to participate not only in the WARP Summit last year, but also today in the 1st Annual Commemoration of September 18th WARP Summit, is to call on implementing an International Convention on the Cessation of War. There is no country without women and youth. If the International Convention in which women and youth hold an important role in support of our society is ratified, we then should inform current presidents and the United Nations to seek their actions through receiving signatures. When all women around the world become one with International Women’s Peace Group (IWPG) and all youth with the International Peace Youth Group (IPYG), it will no longer be a challenge to pursue peace. I sincerely wish all the words delivered by our guests of honor through their congratulatory speeches become life, light and law that will govern the whole world as a world of peace.”

Chairwoman of the International Women’s Peace Group, addressed that, “It may be hard as an individual but we can do it once we become one… If we form the public opinion for the implementation of an International Convention on the Cessation of War and Achievement of World Peace, we shall have a power that is unstoppable neither by financial pressure nor political influence,” emphasizing the role of women and youth for peace. She continued, “Let’s all become peace messengers, gather our hearts, and speak out for the implementation of an International Convention to be ratified.”

Ratu Wiliame Mataika, President of the National Youth Council of Fiji, said the following at the women and leaders’ conference: “Countless innocent lives are being lost when wars are abrupt. I also believe youths have to protect themselves to prevent any future conflicts and wars. As a member of IPYG, I will spread the message of peace and my experience in Korea and practice with many youth in Fiji through various projects. We will collaborate with HWPL and IPYG to support their objectives, which are the implementation of the convention on the cessation of war. I believe that we, youth, have to pave the way through our actions to achieve our common goal.”

The Religious Leaders’ Conference took place after the Women and Youth Leaders’ Conference with over 60 prominent representatives of various faiths. Chairman Lee stated that religious leaders have an integral role in educating their congregations that differences in religious beliefs must not hinder the progress of establishing world peace. Currently, many of the religious leaders are voluntarily establishing and participating in HWPL’s WARP Office events in their home countries; meeting for discussions with other religious leaders on a regular basis and advocating for true values of unity of religions and peace.

Day 2 of the Summit is eagerly anticipated. The Plenary Session for the Development of the Convention on the Renunciation and Cessation of War and International Armed Conflicts will be held on the 19th of September to officially present the first draft to the entire world. At the Panel Discussion, ten world-renowned experts in the field of international law will be appointed as HWPL’s International Law Peace Committee.

The 1st Annual Commemoration of September 18th WARP Summit has become the pillar of sustainable peace with women, youth, and world leaders gathering at the opening ceremony and stimulating the implementation of the Convention on the Renunciation and Cessation of War and International Armed Conflicts. This Convention will surely ignite the flame of peace in the hearts of all humanity