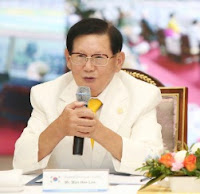 This convention is a product of cooperation among international law experts from various countries, which began since the signing of the Agreement to Propose the Enactment of International Law for the Cessation of Wars and World Peace at the 2014 WARP Summit. The convention stresses the need to strengthen the provisions for renouncing war and other international armed conflicts and further calls on states to abide by those provisions. This project began with the intent to settle armed conflicts only by peaceful means. The convention, upon its presentation at the conference, garnered support from not only legal professionals but also youth, women, and journalists who were in attendance.

And on the 19th, members of the International Peace Youth Group (IPYG) and the International Women’s Peace Group (IWPG) were in the audience of the conference and panel discussion on the international convention. On the previous day, members of the IPYG and IWPG signed the statement to urge for the implementation of an International Convention on the Cessation of War and Achievement of World Peace. This convention, drafted by the HWPL International Law Peace Committee, addresses the tragedy of lives lost in the midst of wars and conflicts and further states that the majority of those affected are the youth and women. Moreover, it emphasizes the role of the youth and women in achieving peace.

Mr. ManHee Lee, the chairman of HWPL, and the chairwoman of the IWPG (an affiliate organization of HWPL), stressed that drawing up provisions that prohibit the use of armed force in any circumstances is fundamental to achieving world peace. Through his worldwide peace movement, Mr. ManHee Lee is calling on people all over the world to transcend all borders and join the efforts for the implementation of the international convention on the cessation of war. As a result, legal professionals, politicians, and religious leaders around the world are joining the cause. The 1st Annual Commemoration of September 18th World Alliance of Religions’ Peace Summit showed the efforts and achievements made to leave a world of peace to the future generations through the international convention on the cessation of war.