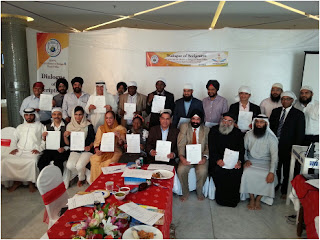 Lebanon- On May 9th, the delegates were invited to a meeting of 30 religious leaders with the Eparchy of Sidon. Participants were introduced to the work of HWPL by watching the highlights video of the last WARP Summit and listened to the message of Mr. Lee on the importance of religious leaders in establishing peace. Afterwards, they all promised their active collaboration with HWPL.
photo credit: Flash 90
Meeting with 30 religious leaders in Sidon.

Bahrain- On May 18th, religious representatives from Hinduism, Islam, Sikhism and Christianity gathered to sign a peace agreement. Moreover, the WARP Dialogue was followed by meetings with youth and women group leaders and politicians. Inspired by the delegates
activism, they all agreed to cooperate with HWPL in the hope of fostering a more peaceful world.

Kuwait- On May 25th, 'International Peace Youth Group Walk festival was held for the 2nd Annual Commemoration of the Declaration of World Peace. The event was hosted by the Kuwait House and sponsored by Kuwait Ministry of Interior. The commemoration was simultaneously held all over the world, in over 50 cities across 30 countries including Seoul, New York, San Francisco, and Berlin. In the commemoration ceremony, youth supported the enactment of an international law to end wars and promote the value of peace.

The visit of HWPL, delegation was a journey which bore witness to the fruits of cooperation between those who love peace in the region. It was an opportunity to not only learn about the people and their desire for peace that transcends religion, race, and gender, but also to reaffirm Mr. Man Hee Lee statement that everyone has a peaceful heart. The initiatives of HWPL following this visit are now being watched with keen interest.

The religious conflicts are approximately 80% of the world’s wars!

The only way to solve the problem

At the 2014 Peace Summit, members from each religion made a pledge in sight of God, the heavens and the earth, all peoples of the world, and the Peace Advocate to become one under God by unifying all religions.

This is the only way to cease all wars in the world and to achieve peace—so that it can be left as a legacy to the future generations.


We must bring cessation of all wars in the world and achieve peace that can be left as a legacy to the future generations.