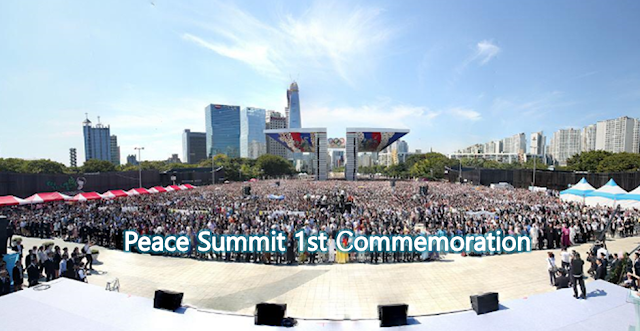 The opening ceremony of the 1st Annual Commemoration of September 18th World Alliance of Religions’ Peace (WARP) Summit successfully took place at Olympic Peace Plaza in Seoul, Republic of Korea over the course of two days.The host organization, Heavenly Culture, World Peace, Restoration of Light (HWPL),is a non-governmental peace organization registered under the UN Department of Public Information (DPI). It is at the forefront of peace-building in direct response to international disputes and armed conflicts. The co-organizers of the commemorative event are the International Peace Youth Group (IPYG) and International Women’s Peace Group (IWPG), both affiliates of HWPL.

On September 18th 2014, HWPL provided a platform where numerous world leaders gathered in one place to sign a pledge in support of a draft for a ‘Proposal to Implement an International law for the Cessation of War and World Peace’. While last year’s Summit included in-depth peace discussions covering various sectors of society, the 1st Annual Commemoration of September 18th WARP Summit will feature the presentation of the first draft of the Convention on the Renunciation and Cessation of War and International Armed Conflicts.

To mark the first day of the event, colorful booths were set up with various programs and exhibitions that explore Korean traditional culture and food tasting. In his opening speech, Chairman Man Hee Lee of HWPL stated, “One year ago, at the World Alliance of Religions’ Peace Summit, we called heaven and earth as witnesses and pledged to implement an international convention and the alliance of religions in the sight of God, all people of the world, and the Peace Advocate.” He continued to speak with emphasis that “This is the eternal light which will cease all wars, achieve peace, and leave it as a legacy to future generations,” urging to become messengers of peace.

Chairwoman of the IWPG expressed her gratitude towards all the global family of peace who are joyfully celebrating the first anniversary of the WARP Summit at the site. She stated, “The world has been changing since the WARP Summit last year,” mentioning the efforts of the implementation of the international convention and the alliance of all religions. Chairwoman Kim emphasized HWPL’s efforts towards the unifications of the Korean Peninsula and that “countless peace organizations and media around the world joined forces with the IWPG and IPYG, the two supporting wings of HWPL, in committing to the peace movement.” 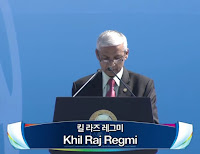 Mr. Khil Raj Regmi, former Chairman of Council of the Ministers and Former Chief Justice of Nepal, delivered a congratulatory message. “The initiatives of HWPL are exemplary to the entire world, as the activities of HWPL for advocating peace is unique and effective in all spheres. I have a firm belief that HWPL has been able to continue its activities for global peace with inspiring guidance, motivation, and the leadership of Chairman ManHeeLee. I appreciate the idea of Chairman Man Hee Lee who expressly emphasized it and determined that a separate convention for peace is a need of the present world. I am optimistic that the conference will serve as an impetus for the codification and declaration of the international convention for peace.”

On behalf of the international community and nongovernmental organizations, HWPL is taking the lead in peace-building in response to a world rife with disputes and armed conflicts. Such efforts are evident from not only the upcoming commemorative event but also with the peace activities of the two affiliated organizations of HWPL, IWPG and IPYG.  HWPL is striving to promote world peace and prosperity of mankind by presenting the most peaceful solution to the structural problems that our society is currently facing.