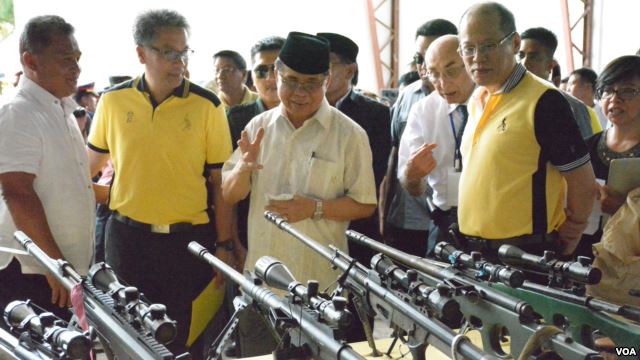 COTABATO CITY, PHILIPPINES— Muslim rebels in the Philippines have started the process of laying down their arms as part of a one-year-old peace pact that is currently hitting snags in the country’s legislature.

Jacob Palao, 66, was one of the first in line.  During 41 years of fighting he became a deputy commander in the operations section of the Front’s armed forces.

Palao says apart from turning over the arms, he signed up for help to start a business since that was what he studied before he joined the fight against government.
Officials say the weapons are high-powered and fully functioning, coming “directly from the ground.”  They say the decommissioning process is being funded with $53 million that is being dispersed throughout various government departments that will serve the rebels.  They include the Education, Social Welfare and Development and Skills Training Departments.

“This is also about the transformation of the Philippines to become more just, more inclusive, and to granting space to the Bangsamoro people to direct our lives as we want it, in accordance with our deepest spiritual values,” said Murad Ebrahim.

Under terms of the agreement, an autonomous region called the Bangsamoro would be formed in part of Mindanao Island in the country’s Muslim-majority south.  But lawmakers are questioning the constitutionality of a proposed law that would create the area and some want to scrap it altogether.

Asking for ‘a decent and peaceful life’

In a speech at the decommissioning ceremony, President Benigno Aquino said the rebels were showing their sincerity by turning over their arms.  He says they are simply asking for “a decent and peaceful life,” which is “what every Filipino desires.”

“We also need to admit that we have had our own shortcomings. It is not written in our religion or laws that we should perpetuate the ills of the past. Today, we are given a new opportunity to right the wrongs, and I ask: Will we walk away now?” said he.

Aquino said he is investing his time in meetings with Congress to try to refine the so-called Bangsamoro Basic Law (BBL) and iron out concerns.  Many express concern that the proposed law will be watered down from what was originally submitted.  Cardinal Orlando Quevedo who heads the Catholic Archdiocese in Cotabato says at the very least the measure should remain in its original form so it can be vetted properly in the Supreme Court.

Baina Samayatin who heads the non-profit Moro Women’s Development and Cultural Center in Cotabato attended the decommissioning ceremony.  She said now that the weapons turnover has started, families of the fighters are sad.

“They are just not so sure, especially since we don’t know the situation with the BBL.  So there’s a fear that it will be scrapped… of course it has to pass otherwise there might be war again,” said Samayatin.