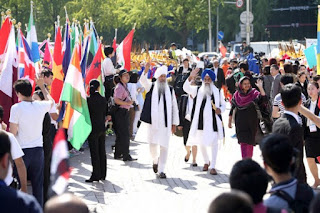 South Korea—Over 700 religious leaders, including the Jathedar of Akal Takht Giani Gurbachan Singh, and 50 heads of states attended the “World Alliance of Religions: Peace Summit” held on Sept. 17-19, 2014, in Seoul, South Korea, with the theme of “The Enactment of an International Law for the Cessation of Wars and Legacy of Peace and the World Alliance of Religions.”

Hosted by Heavenly Culture, World Peace, Restoration of Light and its Chairman Man Hee Lee, the three-day summit presented a new approach for a world alliance of religions as a concrete proposition of peace building, involving both political and religious leaders.

“Each religion claims to be based on the Creator, yet there are hundreds of different religions with different scriptures and practices,” said Lee. “These religions then have disputes with each other, bringing disgrace upon God. It is through this that corruption has manifested itself throughout religious denominations.”

“The true God does not create conflicts that kill people,” said Lee. “When religions, which have all become corrupt, offer themselves to the true God and unite under the Creator, then the conflicts between these religions will be resolved, and world peace will be achieved. The true God, who is the source of all blessings, will reign over the world, and He will unite with religion which has become one.”

Religious leaders from over 120 countries came together on common grounds during the event. “All scriptures are telling us that religions must unite,” said Giani Gurbachan Singh of the Sri Akaal Takht Sahib, “a religious leader who speaks of division and conflict is not a religious leader.”

The opening day ceremony of the WARP Summit began at the Seoul Olympic Stadium, showcasing a card section performance and fireworks involving over 12,000 members of different youth organizations, each holding cards synchronized to music while displaying stadium-sized images and messages.

On the second day of the WARP Summit, religious leaders proclaimed they would transcend religious denominations and embark upon the establishment of the unity of religions in order to bring about world peace. 12 religious leaders, including Giani Gurbachan Singh, Jathedar of the Akal Takht, Antonio Ledesma, archbishop of Cagayan de Oro, Swami Chidanand Saraswati, president of Parmarth Niketan Ashram, Martin De Jesus Barahona, bishop of the Anglican Episcopal Church of El Salvador, participated in the signing ceremony of “The Unity of Religions Agreement,” declaring that all religions must unite as one under the name of God.

As outlined in its text, the signatories of the Agreement pledged to pursue “this duty to establish peace and end all wars on this earth, and, as a united religion… this we recognize as a task appointed to our generation.” The Agreement also explains the meaning of Heavenly Culture, which uses examples from nature to explain how peace is a freely given and unalienable right of all people under their Creator: “We [by signing below] recognize … the need to show grace to all people of the world; grace which can be seen in the light, rain, and air of heaven, and through that grace, lead humanity from salvation to death.”

As millions of viewers joined the summit via international press broadcasts, these 12 distinguished signatories fulfilled the words of Mr. Lee given just one day before during his opening speech: “According to the will of heaven, the time of a previous, corrupted generation has ended and we now welcome a new generation.”

Following the signing, five panel speaking sessions allowed for government officials, prime ministers and chief justices to discuss and enact “The Agreement to Propose the Enactment of an International Law,” a pledge to be on the frontline of raising awareness for an international law to end war.

As youth and women are often victims during times of war, the summit also provided a platform for youth to address the conflicts in their home countries at the Youth Conference attended by 600 representatives of youth organizations. The subsidiary branch of HWPL for women, International Women’s Peace Group (IWPG), also held two sessions. IWPG’s representative, Chairwoman spoke on the role of women—whose sons, brothers and husbands are the soldiers of war—to stand together for peace with motherly love.

On the last day of the WARP Summit, a total of 200,000 people including summit participants, members of international NGOs and local citizens, participated in the “Walk for World Peace” near Seoul Olympic Park. This event, hosted by the International Peace Youth Group (IPYG), commemorated the final day of a successful “World Alliance of Religions Peace Summit.”

“This occasion where the heads of state and religious leaders came together for peace is unprecedented,” said Stjepan Mesic, former president of Croatia. “Mr. Man Hee Lee’s idea is really amazing and excellent. This wonderful event will definitely play a positive role in bringing wars to an end and achieving world peace.”