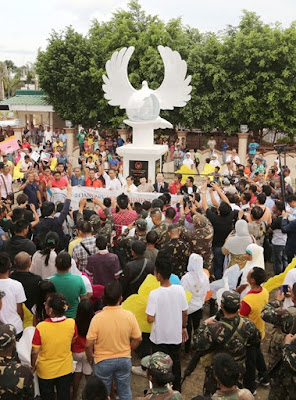 Chairman of HWPL, Man Hee Lee has actively been helping foster religious understanding among Christians, Muslims and other groups.

Summit organizers are also expecting representatives from the Heavenly Culture, World Peace and Restoration of Light, a popular South Korean peace advocacy outfit, to attend the summit in Buluan.

Two officials of the Seoul-based non-government organization, Philippine coordinator Joon Park and its manager, Kim Si Man, had earlier visited Buluan to search for a site where they can construct a “peace monument” in recognition of Mangudadatu’s domestic peace programs and his administration’s extensive support to the Mindanao peace process.

Only Mangudadatu, from among the five provincial governors in the Autonomous Region in Muslim Mindanao, has openly been campaigning for public support to the draft BBL.

Mangudadatu said they have also invited Central Mindanao’s ranking Muslim clerics and leaders of Christian sects, including Catholic priests to join the summit.

Members of the congressional committee handling the bill had voted in favor of the measure, now for plenary proceedings.

The May 25 provincial peace summit is the 33rd major pro-BBL activity of Mangudadatu’s office since the bill was submitted last year to Congress, via Malacañang, by the Bangsamoro Transition Commission.

The commission, chaired by the MILF’s chief negotiator, Muhaquer Iqbal, is comprised of seven representatives each from the rebel group and the government.