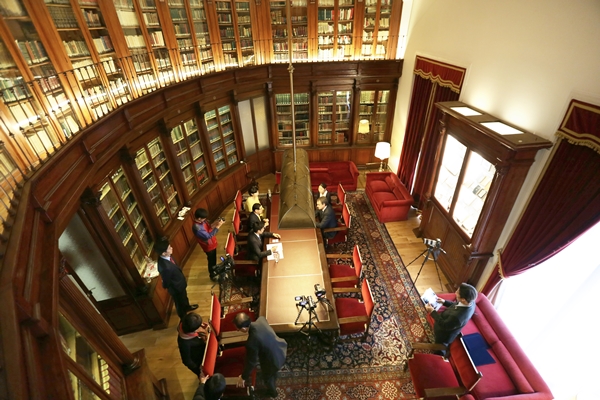 Since 2012, Peace advocate Man Hee Lee Chairman of HWPL, peace organization has been traveling world meeting with notable leaders in both secular and religious circles, today's world peace tour is in 9th his works, history

Since 2012, Peace advocate Man Hee Lee has been traveling world meeting with notable leaders in both secular and religious circles. On this, his 9th(^.^:; 2015, until now: 18th world peace tour) and most recent trip, he held talks with the vice-president of Peru, Ms. Marisol Espinoza in Lima, Peru.

Following that, the former presidents of Guatemala – Mr. Alvaro Colom Caballeros, and Colombia – Belisario Betancur, in Bogota, Colombia. In Chile he met with the former president Mr. Ricardo Lagos in Santiago, Chile. His Excellency, Mr. Jose Mujcia, the President of Uruguay met with Mr. Lee in Montevideo, Uruguay.


During his talks with the leaders, the peace advocate urged each of them to help bring an end to wars and conflicts still besetting their countries and neighbors. The inspired vision of peace that he painted in his message was not lost of any of the leaders of the South American continent.

Throughout his world peace tours, press and media kept a close watch on the intrepid 84-year-old peace advocate. Telenoticais 23, a Live News broadcasting station located in Guatemala City, covered the flower-laying ceremony, ensuring that the story of the Korean peace advocate’s mission of peace was announced all over the country. In Peru, RBC Television Channel 11 covered similar stories of the meetings and tours of the World Peace Delegation from Korea.

As part of his world peace tours, Peacemaker Man Hee Lee signed a peace agreement with the Guatemalan government in 2013, as well as with the leader of the Maya community. This year, the same agreement was entered into by a leading representative of the Inca community. Mr. Lee’s vision of peace is for the agreement to be signed by representatives of all cultures, religions, ethnic groups, and governments in the world, thus providing common grounds on which resolutions for conflicts, and ultimately the cessation of wars can be achieved. With each new meeting, entire communities are showing their support for the movement by signing this agreement – a sign that Mr. Lee’s message is one that truly resonates with the hearts of the people.