Students rally for peace with Korean minister in Long Beach

LOS ANGELES – Hundreds of students from school clubs of UCLA, UC Irvine, Cal Poly Pomona, Pepperdine and Cal State Fullerton rallied together last Friday to promote a message of peace aboard the SS Lane Victory in San Pedro, a fully operational cargo ship and historical museum which was used during the Korean War to rescue refugees. 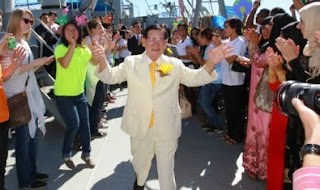 The event began with a colorful costumed peace rally for clubs to express their passion for peace and concluded with a signing of the IPYG Declaration of Peace, which calls on all youth “to unite in an effort to stop wars and pursue the restoration of peace by agreeing not to fight one another.” 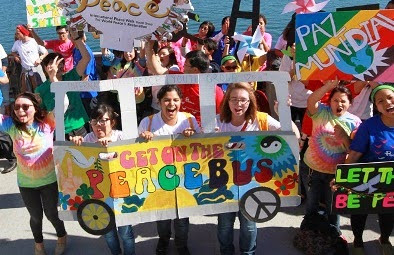 
Peace maker Man Hee Lee’s address urged youth to fulfill their responsibility of peace. “The youth usually are the ones who go out to fight in these wars. If the youth become one, then without the youth, war is impossible” said Lee. Chairwoman of International Peace Women’s Group, also appealed to mothers to work together for a future of peace for their children.

IPYG is one of the world’s largest youth coalitions working with 128 organizations in 53 countries for peace. Earlier this year, IPYG hosted the International Peace Walk drawing 27,000 youth, including Los Angeles residents to march for peace at the Seoul Olympic Park in South Korea.