MKM Youth Chairman in Korea for peace summit by HWPL


MKM Youth Chairman
in Korea for peace summit by HWPL 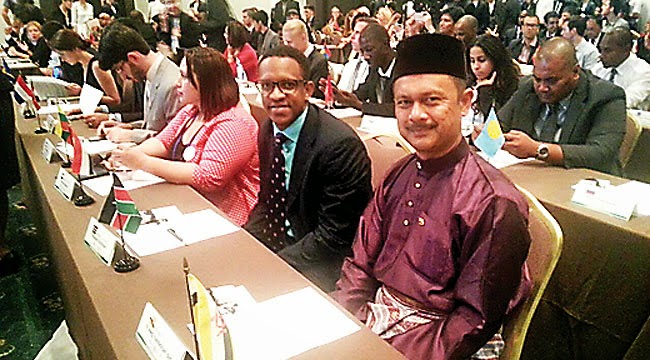 ※ MKM is an NGO whose main objective is to address social issues in Brunei and coordinate the efforts of the various social welfare NGO’s in Brunei towards improving the welfare of vulnerable groups in the country.

MKM was invited by the Chairman of WARP to participate in the youth meeting and discussions on the role of all religions in bringing peace to the world.

A total of 160 countries represented by religion’s chiefs and non-governmental organisation’s (NGOs) chiefs are at the peace summit which will end tomorrow (Sept 19).

Haji Awang Hasbollah attended a “Preliminary Meeting of Youth Leaders for Cessation of War and World Peace: United youth have the power to change the world” yesterday where all the participants signed a paper of “Appeal of the International Peace Youth Group (IPYC)”.

Haji Awang Hasbollah at the peace summit by HWPL

Through the appeal, the youth signing it, pledged to the best of their ability, to practice four things in order to protect themselves and other youth from the devastation of conflict and war.

They support the alliance of religions for the cessation of wars and the achievement of world peace, and call on the former heads of state and judges of each nation to actively pursue the establishment of an international law for the cessation of war and world peace. Thirdly, on behalf of all the youth of the world, they call on each current head of state to sign for the drafting and enactment of an international law banning wars and ushering in world peace.

Last but not least, they pledge to protect themselves from war and accomplish the appointed task that has been given to the youth of this generation in order to create a world of peace.