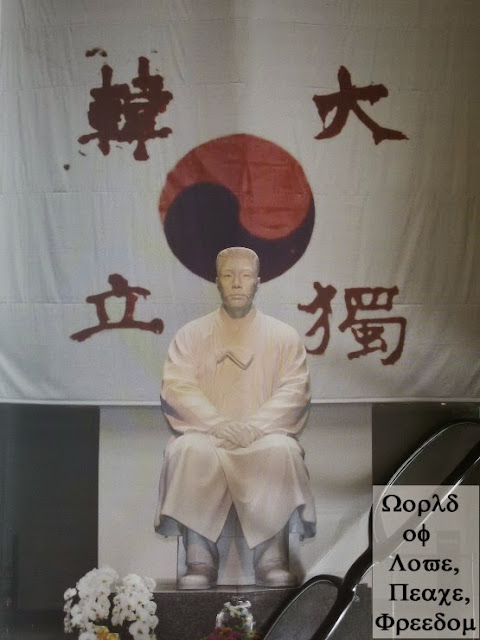 "... ... while Ahn Jung-geun openly professed his delight. His only fear through all the speeches for the defence was that the Court might be induced to let him go free. He was ready for martydom, ready, nay, cager, to "give up the dear habit of living." He had the here's crown almost within his grasp, and he left the Court proudly. Has this cause celebre, so beautifully conducted, so wisely judged, ended as a score for the murderer and his misguided fellow-patriots after all?"

This was the testimony of a foreign reporter, Charles Morrimer who witnessed the trial.
As could be seen from the article, Ahn Jung-Geun was willing to sacrifice his life far peace.
Where did this courage come from? Choi Bongryong, a professor at Dalian University explained that the source of
"On Peace in East Asia" came from the Confucian ideology he learned during his youth that says one must first be able to discipline oneself in order to rule the country and the world and the ideology of providence from the Catholic church, Professor Choi explains that the influence of these two ideologies became the root of his theory of peace in the Est.
That is, the ideas of coexistence and a win-win strategy that could be found in both ideologies became the stepping stones for Ahn to become an envoy of Peace. 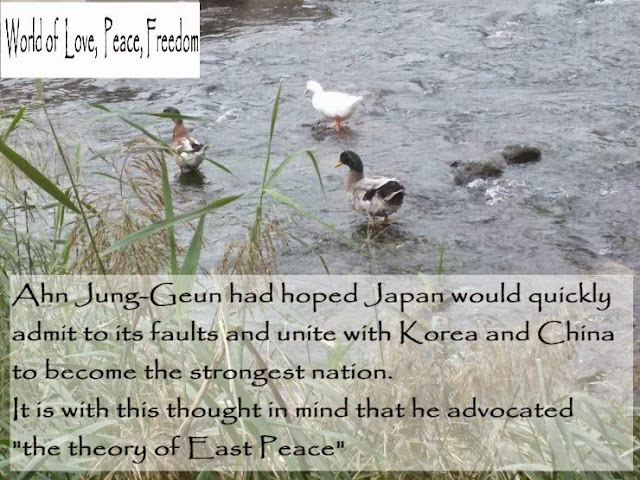 The relationship between Korea, China and Japan right now is unstable due to what happened in the past, territorial disputes, and tension that has been accumulating over small and big matters. However, if we look at the world with a broader viewpoint and think about what would be the most beneficial, the day three nations will be working closely together is not too far away. It is a fact that some groups have voiced disapproval of a common currency for the three nations. However, when looking at the EU, although there are various languages and cultures, it is still, as  it has been in the past, France, Germany, and Spain. The synergy effect is amplified when various nations, their histories and cultures come together to form a foundation. What one must pay careful attention to is the relationship between the European nations such as Germany and France. In the past during World WarⅡ, Germany committed a grave mistake, but it sought for the forgiveness from the nations that were victimized and is doing its best in playing its role as a member of the union. This is why Europe today is not suffering from instability but is able to maintain security and peace.

Ahn Jung-Geun also had hoped Japan would quickly admit to its faults and unite with Korea and China to become the strongest nation. It is with this thought in mind that he advocated the theory of East Peace.