Alerts through the Unfinished
Dongyang-Pyeonghwaron
(The Theory of East Peace) 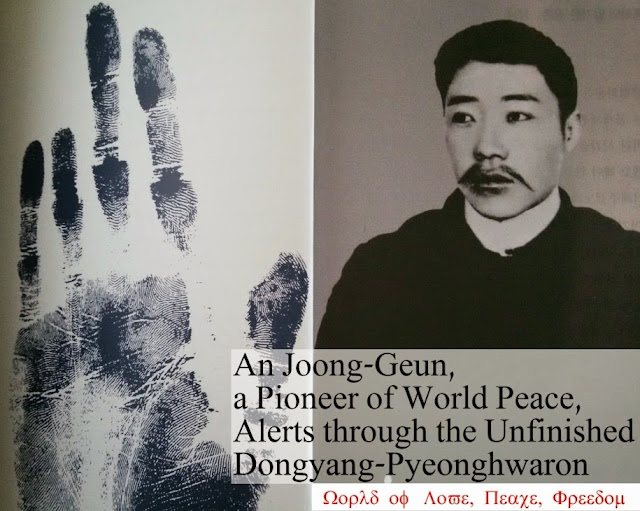 1909 July 6, about 4 months had passed since Japan decided to annex Joseon dynasty in the cabinet meeting. October 26, in front of the Harbin station in China, Ito Hirobumi fell on the spot his by a bullet from the gun of Ahn Joong-geun, the Korean civil army's chief of staff. This was a significant event that shook the entire East Asia. Ahn Jung-geun, who we know as a here that killed Ito Hirobumi, the enemy of the Korean nation. However,  Ahn Jung-geun shooting Ito was a part of the practice based on "The Theory of East Peace" which came from his self-consciousness. At the time, Harbin station was the center of the mideast railways, and the shooting incident of Ito drew a big attention from the world society.

After Ahn Joong-geun's Harbin attack against Japanese imperialism, Japanese military government swiftly followed suit with its unilateral trial of Ahn Joong-geun while proclaiming they abide by the international law. October 30, a few days after the incident, Ahn Jung-geun enumerated 15 clauses of reason why he shot Ito during the first prosecutor's interrogation. In his note he revealed in the 12th clause that "Ito disturbed the Oriental peace. Ever since the Russo-Japanese wars he proclaimed that he would protect Korea's independence but he drove out the emperor of Korea. Those were the opposite result from the initial declaration, so the 20 million people of Korea were infuriated."
Japan moved Ahn Joong-geun to the Lushun Prison in China on November 3 but continued with the interrogation. On February 7, 1910, they started the public trial and after four revisions, Ahn was given a death sentence on the 14th. Shicano Dakumiru, a Japanese scholar pointed out in 1994 through his "Theory of An Joong-geun's Innocence," that "such judgement is completely unfair and unlawful, and he should have been acquitted."

"The Theory of East Peace" is an unfinished book regarding the fulfillment fo Oriental peace that An Jung-geun wrote in jail in March of 1910 waiting for the death penalty. It is told that a Japanese prison guard lowered his head when Ahn Joong-geun wrote Dongyang-Pyeonghwaron(The Theory of East Peace) was an admonition towards Japanese Imperialism, which changed the world into an aggressive war zone, along with the Nazism in Germany and Fascism in Italy.

To be continued tomorrow.