Alerts through the Unfinished
"The Theory of East Peace" 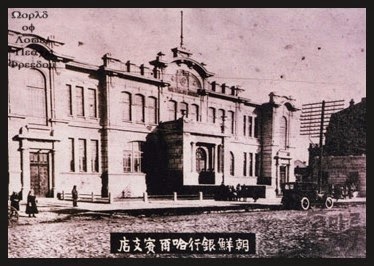 ▲ The Bank of Korea(Joseon) in Harbin   -The source of photograph : Geulmaru-


At the time of 1910 (the year of Kyeongsul), when Japan was firing up the ambition of aggression by gaining Joseon(Korea) as a foothold, he criticized the invasion policy explicitly shown by Japan, insisted on amending and tried to alert Japanese administrators of the ambition. These contents are included in An Eung-chil Yeoksa, "The History of An Eung-chil," and Dongyang-Pyeonghwaron(The Theory of East Peace) in Ahn's prison cell.

Although the autobiography An Eung-chil Yeoksa was completed, for "The Theory of East Peace", which is a collection of articles, only the 'Preface' and 'Jeon-gam1 "were written. The rest of the book is unfinished with only chapter headings given; "Hyeon-sang 2,"  "Olk-seon 3," "Mun-kap." At the time, An Joong-Geon asked for the postponement of the execution for about a month to complete the book, and the permission was granted. However, the promise was not kept. The sole purpose of Ahn Joong-Geun was to protect the independence of Korea and the peace of the East. He was looking ahead to world peace, which would start from the peace in the East.

What was it that Ahn Jung-Geun wanted to leave to Asia and moreover the world through "The Theory of East Peace"? In ambiguous the Declaration of Independence and the First Constitution of Korea which was established on March 1st, on 1919(Kiminyeon) based on his book should be seen as closely related.

The preamble of the Constitution of the Republic of Korea resolute as follows: "We, the people of Korea, proud of a resplendent history and traditions dating from time immemorial, upholding the cause of the provisional Republic of Korea Government born of the March First Independence Movement of 1919 and the democratic ideals of the April Nineteenth Uprising of 1960 against injustice, having assumed the mission of democratic reform and peaceful unification of our homeland and having determined to consolidate national unity with justice, humanitarianism and brotherly love, and to destroy all social voices and injustice, and to afford equal opportunities to every person and provide for the fullest development of individual capabilities in all fields, including political, economic, social and cultural life by further strengthening the basic free and democratic order conducive to private initiative and public harmony...  To elevate the quality of life for all citizens and contribute to lasting world peace and the common prosperity of mankind, and thereby to ensure security, liberty and happiness for ourselves and our posterity forever."

Lee Tae-Jin, an emeritus professor at Seoul National University (former Chair of the National History Compilation Committee) in the "2010 International Conference Commemorating Centenary of the Patriotic Deed of Martyr Ahn Jung-Geun" stated that "The idea of Ahn Jung-Geun expressed in "The Theory of East Peace" has achieved the future-oriented result domestically. The coexisting relationship that assures in dependent survival as the base of the world peace which he mentions in the book is also expressed in the 1919 Declaration of Independence as "Gonjon-Dongsang Gwon (the happiness of humanity. Ahn Jung-Geun's "The Theory of East Peace" written in jail was a pioneering achievement that proposed the world which other scholars were feeling keenly of its necessity after the forced annexation."

The Korean peninsula is still left as the only divided country in the world. The Middle East and landlocked states are also suffering from civil wars. The world today is urgently crying out for peace. "The Theory of East Peace" which the pioneer Ahn Jung-Geun had left incomplete emphasizes the cooperation between the Asian and world community. It sees that what leads the oriental peace advancing world peace is the realization of the alliance body of states that assures the independence of nations and an equal relationship between parties. 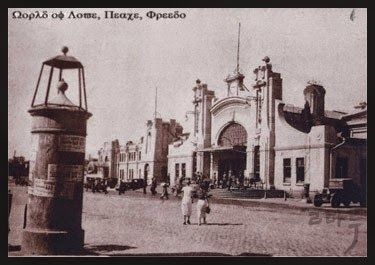 ▲ The train station at Harbin, China in 1909   -The source of photograph : Geulmaru-